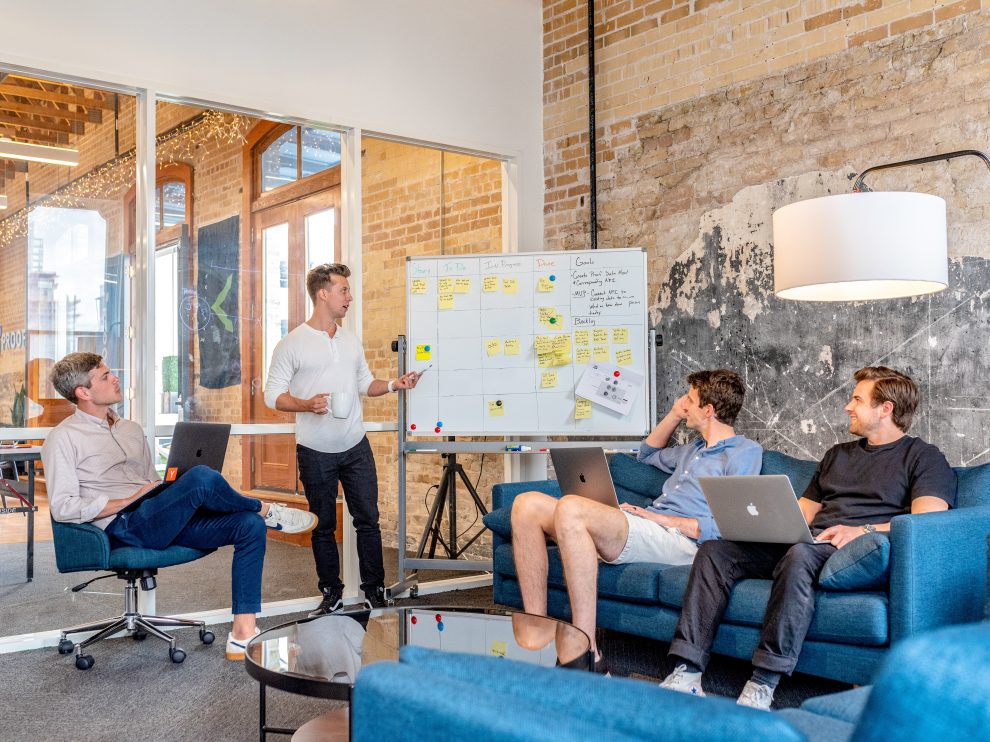 I have been planning to write this article for a long time, but maybe in the back of my mind I was waiting for more validation of this thesis. Now we have a sufficient number of examples that validate the concept such as the many success stories like Ooyala*, Authy**, Grin, Playvox, Rappi, Platzi and many others.

Many digital startups have faced the reality of the hyperconnected world, where a conventional legal structure may not be enough to maintain an agile operation ready for the exponential growth that every startup dreams to achieve.

For startups born in the United States, it is a huge challenge to find product-market fit and it is becoming harder to find the right talent to develop and grow, especially in Silicon Valley and New York City (also called Silicon Alley).

Similarly there are many entrepreneurs and startups born in Latin America facing the harsh reality that they need to think bigger and globally to really be able to increase their user base and reach the exponential growth needed to attract venture capital.

Therefore, a startup that pursues an innovative solution for the global market (starting in the USA) and hires talent in Latin America would be the optimum combination of both worlds. The next challenge for a startup founder is how to set up an agile legal structure to accomplish this goal.

The simple way is to set up a legal structure with the main (or holding) company under the law of the State of Delaware and keep a local subsidiary in the chosen Latin American country which they can use to source the best talent.

Latam Talent has been validated by many US based companies including Oracle, Twilio, Ooyala, Voicebunny, Alltherooms, Lending Front, Platzi, Nubank, Stabilitas and many more. These firms are creating world class software products with talented developers in Latin America.

Few years ago, ***Fred Wilson wrote an iconic post about the challenges facing startups to find and retain the talent and he said that founders with the opportunity of having talent outside New York or Silicon Valley should try it. Startup founders can find more ‘loyalist’ engineers in Latam than in the USA.

Firstly, for a startup planning for capital fundraising, the best recommendation is to set up a corporation structure in the USA with Delaware being the preferred jurisdiction for startups and venture capitalists. Frequently we are asked these two questions: 1) Why in Delaware? 2) Why a corporation and not a limited liability company (LLC). There are multiple answers to these questions but I like to summarize them in this simple answer:

DE C-corporation gives you the most flexibility and the most certainty of outcome. Only C corps can have different classes of stock (a necessity for the preferred stock that VCs prefer), and DE is the best because they provide very wide latitude to management and have a great and well-understood corporate legal system with lots of case law. This means that everyone knows what the rules of engagement are going in, and the judges in the Chancery Court (if it ever gets that far) know what they’re doing.

There are many more extensive answers and explanations of why Delaware make sense and I would recommend reading this guide directly from the Delaware Department of State, Division of Corporations.

As mentioned above, Delaware is the best known and most recommended jurisdiction for a corporation and it is important to emphasize the differences between a small company (or a services company) and a startup. Let’s start by the definition of startup and again there are thousands of them, but I like this particular one:

DE C-corporation gives you the most flexibility and the most certainty of outcome. Only C corps can have different classes of stock (a necessity for the preferred stock that VCs prefer), and DE is the best because they provide very wide latitude to management and have a great and well-understood corporate legal system with lots of case law. This means that everyone knows what the rules of engagement are going in, and the judges in the Chancery Court (if it ever gets that far) know what they’re doing.****

There are many more extensive answers and explanations of why Delaware make sense and I would recommend reading this guide directly from the Delaware Department of State, Division of Corporations.

As mentioned above, Delaware is the best known and most recommended jurisdiction for a corporation and it is important to emphasize the differences between a small company (or a services company) and a startup. Let’s start by the definition of startup and again there are thousands of them, but I like this particular one:

A startup company (startup or start-up) is an entrepreneurial venture which is typically a newly emerged, fast-growing business that aims to meet a marketplace need by developing or offering an innovative product, process or service.

The most important concept in the above startup definition is growth, as summarized by Paul Graham “a startup is a company designed to grow fast”***** and that is the main difference between a startup and a small or consulting company. There are many ways to grow, either by bootstrapping and organic growth or backed by venture capital.

All of the most successful companies in the past few decades (Amazon, Apple, Cisco, Dell, Facebook, Google, Microsoft, Oracle, etc..) who are part of the Top 100 Fortune have been backed by Venture Capital. As an anecdotic comment only six of the Fortune 100 – 2017 were founded in the past 30 years and most of them have been backed up by Venture Capital including the biotech company Gilead Sciences.

Of course not all startups will become Fortune 100 companies, but the fact is that VC investment will be an important component leading to faster growth, encourages incorporation in the State of Delaware as that is the preferred jurisdiction of venture capital funds. The problem in trying to create an LLC and later creating a CORP when the time comes to raise venture capital would be a big expensive mistake as has been the experience of some Latam born companies.

The only time when an LLC would be recommended is when the company has no plans to raise venture capital or if it is a small or consulting company (lifestyle businesses that even if they are big do not grow as a startup). Capital management funds are usually LLCs and the funds are Limited Partnership (LP)  structures.

Considering other jurisdictions for tax purpose like Cayman Islands is just unnecessary and risky, regardless if the founders are foreigners or US residents. Tax havens like the Cayman Islands may be considered for the wealthiest individuals or hedge funds trying to reduce their tax burden, but this is not a concern for startups. Most of the Venture Capital firms are ready to take risks investing in startups but not risks involved in the uncharted legal waters of tax havens like the Cayman Islands.

Therefore the best recommendation for a global founder of a startup is to forget about the creative ways to reduce income taxes by using tax havens until they reach their first billion in revenue. Instead they should stick to the Delaware jurisdiction to incorporate their startup and focus on finding venture capital investors. An exception will apply to entrepreneurs that prefer to have a small or consulting company, in which case it would be recommended to explore other options like creating a limited liability company (LLC) in the home state of the startup or for an international entrepreneur, an LLC in Florida would be a good option.

Latam born startups frequently start incorporating using a  local company in their country of origin. Therefore, the best way to synchronize the structure of the Latam company with the US company is to make the Latam company a wholly-owned subsidiary of the Delaware company. Many Latam countries (like Argentina, Colombia and Mexico) have approved in the last decade a company association denominated in spanish as Sociedad por Acciones Simplificada or SAS which is basically a flexible corporate structure in which it is permitted, among other things, to have a foreign company as a single shareholder and this creates a very flexible corporate governance structure.

The most important consideration of a legal agreement regarding the transfer of shares between founders of the Latam subsidiary and the Delaware corporation is to make sure that the intellectual property rights are properly assigned to the holding US company.

For US born startups planing to find or expand their talent pool in Latin America, it is frequent to face the question as to why they should incorporate a subsidiary instead of simply keeping those developers as freelancers and pay them directly from a US bank account. The answer to this has a three fold response: i) the best way to protect the intellectual property (IP) of the company is to hire the talent under a Latam contract in order to make it legally enforceable because Latam labour laws are very protective of employees and therefore a well written contract under the local laws will provide better IP protection.  ii) For the Latam staff, the process and tax regulations surrounding the receivement of foreign payments would create too big of a burden on the employee and iii) in order to include the remote staff in the startup culture of making them shareholders through a stock option plan (SOP) or restricted stock purchase agreement (RSPA) it is better to keep them under a local subsidiary contract because the foreign associate would usually not be subject of an employment agreement in the USA.

We started talking about this structure back in 2012 during the Pulsosoconf, the first truly international conference that put in motion the Startup and Venture Capital Ecosystem in Colombia at a time when very few people agreed on this concept and many not even understood it. Later we wrote about this same topic as a way to explain the subject to the Socialatom’s Portfolio Startups that were going through the VC international fundraising process;  in most recent years as more and more Latam high impact startups are going through international accelerator programs like YCombinator and Colombia with Rappi has produced the first “unicorn” (startup with a valuation over US$1 Billion) the validation of this structure has become stronger. Just to finalize with another anecdote, this year as part of a mission to Silicon Valley organized by the Colombian Government, we were invited to know the support for capital fundraising that the Major office of the City of San Francisco provide to startups coming from anywhere in the world that want to land in the city and one of the entrepreneurs in the meeting asked the San Francisco government officials what would be their recommendation as the first step for a foreign company to raise Venture Capital in Silicon Valley and the answer was straight and simple: First, get your company incorporated in Delaware.

Hernando Barreto, entrepreneur and investor, is a partner at Socialatom Group, majority shareholder of Pulsosocial Inc.

***Fred Wilson is a blogger  and VC investor founder of Union Square Ventures. His blog is called AVC and the article mentioned above can be found here:  http://avc.com/2015/06/loyalists-vs-mercenaries/

*****Paul Graham is a programmer, writer, entrepreneur and investor founder of Y-Combinator http://www.paulgraham.com/growth.html

Photo by Austin Distel on Unsplash

Are You Ready to Start a Business in Latin America?