Joincube has announced a new US$500,000 investment round from U.S. angel investors to expand throughout the Latin American market.

Joincube has announced a new US$500,000 investment round from U.S. angel investors. The corporate social network launched out of Argentina will use the funds to expand throughout the rest of the regional market. 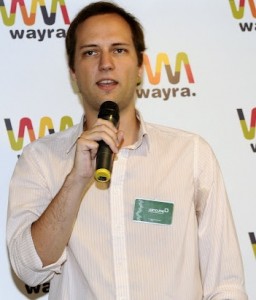 Accelerated by Wayra and Start-Up Chile, Joincube has already received capital from an Argentine angel investor. This latest batch of funding, however, has come from a rather unexpected source. “They’re oil and gas investors in the United States, but based on their corporate experience, they saw the potential Joincube could have for businesses, especially in LatAm,” explained company Mariano Rodríguez Colombelli in a chat with PulsoSocial.

The Joincube platform brings social media connectivity to the corporate environment to help businesses improve the way information is shared among teams and departments. The results are reflected in a reduced need for in-person meetings, less time spent searching for information, and increased productivity from employees. And after a period of evangelization, the time for demand has arrived:

Today, businesses in Latin America are seeking us out. Before, we had to seek them out and explain, but 2014 was a breaking point, because businesses started to recognize their needs. Before, they knew they had a need, but they hadn’t come into contact with the corporate social network concept to consider it as an alternative. We had to take on the task of evangelization, especially in 2013, in order for some local players to get started and implement. After that, there was a contagious effect among clients, in part in virtue of that, and in part because of phenomenal growth worldwide.

Latin America is an ideal candidate to adopt and benefit from social corporate networks sand technologies. According to comScore, five of the 10 biggest social media markets are located in the region, and time spent consuming social content is almost double global levels.

Colombelli said that the market for social collaboration software for businesses will reach US$1.2 billion in Latin America by 2018. Joincube’s client base – companies, universities and non-profits – grew 400% last year, reaching over 2,500 organizations.

Currently, the company is setting up offices in Chile as part of an effort to decentralize its operations:

Management and the commercial end will move to Santiago. The development team will stay in Buenos Aires, and apart from that, we’ll have sales teams in São Paulo and Rio de Janeiro. Until now, we’ve sold in all of the countries in the region without a physical office. We don’t need one, because we’re an SaaS. On the other hand, we now have agreements, like with Telefónica in Argentina, a key distribution agreement to offer the Joincube platform to its four million clients in small and medium-sized businesses in the region. We’re expanding it to other countries, and it’s another channel for commercialization.

Most of this latest investment will go towards commercial efforts. “In part, we’re going to grow the company’s structure, because we’ll officially have offices in Santiago, Buenos Aires and São Paulo by the end of the year,” Colombelli explained. “We’re also going to hire professionals so that, from those countries, we can cover the rest of the region. Most of the investment will go towards commercial strategy and sales personnel.”

Product improvement will be another area of focus, especially when it comes to mobile:

We are going to focus on mobile. The web part we’ve almost got finished. We’re going to improve it as we receive feedback from users, but what clients are asking of us today, and where the market is going, is mobile, for employees to be able to work remotely from anywhere.

With respect to that point, Colombelli pointed out that at the start, Joincube offered a fairly simple mobile version, above all for consuming information. “Once that launched, clients started to ask for more things, the ability to share images, for example, among others. We want to improve the mobile experience so that it is the same as or better than the web,” he explained.

Since launch, the product has added in a number of features, including videoconferences, real-time group work (with or without video), documentation records and project management. “We have a vast offer of features, but within them, we need to be as simple as possible. There can’t be a radical change in companies with this tool. It has to adapt to how they work,” the CEO added.

He emphasized that among big companies, especially in Latin America, Joincube is often compared with SharePoint, though he was quick to point out differentiators:

SP is a sort of data repository, but it’s a tool that’s already known, or at least IT consultants recommend it. Businesses tend to want a tool that encompasses everything. We have the option to integrate information to one single place, a differentiator when confronted with other tools that could offer something similar. If you’ve got different tools for different things, at the end of the day, you’re going to have different information threads in separate compartments (a videoconference system, a file sharing system, etc.). There’s no communication between parts. That hinders productivity and internal communication.