Out of Buenos Aires, Crypto Currency Concepts is placing all of its eggs into the virtual currency basket. It has a handful of projects on the horizon.

Out of Buenos Aires, Crypto Currency Concepts is placing all of its eggs into the virtual currency basket. It has a handful of projects on the horizon, all aimed at “building a better financial system, one trade at a time” – starting with Bitcoin.

Crypto Currency Concepts is the work of a team of Americans and Argentines with different backgrounds and who have joined forces to be on the forefront of what they think may be a financial revolution, starting out of Argentina. “The gravity of the place, you could say, pulled Crypto Currency Concepts together,” reflected company co-founder and CIO Patrick Dugan.

This year, the startup has a few items on the menu for rollout in the cryptocurrency space. In June, the team plans to launch a fund for individuals to invest their bitcoins and profit from trading (a sort of exchange-traded fund). They also hope to release a concept wallet via Android app to allow users to make payments in dollars and other currencies using the Bitcoin network. “Just hold up your QR code for the merchant to request payment, and sign off on it with your password,” Dugan affirmed.

Crypto Currency Concepts has a packed agenda now through 2015, including a market timer, an alt-coin fund and an options fund as well as a real asset investor fund “to bring farms, apartments and renewable energy installations on the network as shares people can invest in for dividend returns and perhaps capital gains as well.” Dugan reflected:

This is going to involve bigger sums of money. As we dig into the real world, we also expect the digital markets to become more liquid. We’d like to see major adoption in Argentina during this time frame, we don’t care who wins the election but we do care that the constituency is disposed to demand concessions for the utility of these technologies – and we expect another weak Peronist government to follow the current one. We hope to get wallet adoption in LatAm and provide market-making so people can just automatically trade between dollars and pesos for a low spread, and build a smart routing platform to enable clients to trade in and out of different forms of crypto-assets for the best price.

Not one to shy away from speaking his mind or voicing atypical opinions, Dugan discussed Crypto Currency Concepts and his take on world financial systems and technology in an interview with PulsoSocial.

Emily Stewart: Technology-wise, there’s generally a lag between the U.S. and other developing markets, like Latin America. But in the case of Bitcoin, I get a sense that’s not necessarily the case. 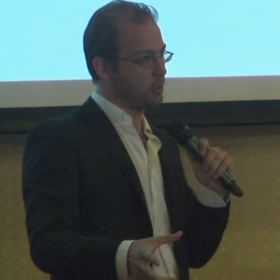 Patrick Dugan: In the U.S., Bitcoin is treated like gold on crack. It’s an investment for weird people, and it’s a talking point for VCs and hip politicians who are reframing it as just as cute way to compete with Visa or Western Union on fees. People in the U.S. have pretty good financial services provided by the banking system, except for that whole crashing the economy thing. The state of regulation in the U.S. creates a protectionist levy against U.S. persons and U.S. banking system money flowing into the crypto-financial system. Coinbase and now Circle are doing it, Kraken might get there, each of these were VC-subsidized endeavors to secure dozens of MSB licenses from different states, if not all lower 48.

In Latin America, people just started doing OTC sales through the banking system with no registration, reporting or licensing of the activity. It just starts happening. In Argentina for example, trading BTC in U.S. dollars and selling it for pesos is the de riguer way to get cash. Going to Colonia, using a financiero who would arrange a wire transfer swap, or using Xoom, are all more expensive than using the Bitcoin network.

I suspect the growth of added layers of financial services coming online, such as betting, investing, hedging, borrowing, etc., are going to see way faster adoption in LatAm than in the U.S., even Canada will outpace the U.S. There is more money in System D and the export sectors of these smaller countries than in the U.S. economy. The gap is going to grow for a decade or two as part of a secular trend towards global economic decentralization.

ES: Bitcoin is definitely still a mystery to most people, and those who do have a grip on it aren’t often able to explain it layman’s terms. How do you resolve that?

PD: We now have a new revolutionary technology in our world, you could broadly call it “distributed consensus computing.” The Bitcoin network is the first major application, you can think of as open-source PayPal powered by cryptography and the inflation of the supply of bitcoins, which are the commodity tied to the network. The people doing the cryptography are making it expensive for someone to cheat the network; they all come to a consensus about a series of transactions called the blockchain. The blockchain is like a banker’s ledger, but it’s held by everyone who runs the Bitcoin core wallet program on their computers.

Soon, we’ll be able to use bitcoins as a reserve currency for issuing synthetic dollars, euros, ounces of silver – whatever has a market with a data-feed we can reference. So if the value of all bitcoins is five billion dollars, and you want to park a lot of Bitcoin away and issue billions of dollars in value, think of it like all the positive balances in PayPal accounts. So you can use the blockchain for more things than just tracking how many bitcoins people have. That’s just step one. Step two is letting people have dollar, euro, peso balances and so on. Step three is getting investments represented and paying dividends, step four is to represent real property. Imagine being able to invest in a rental apartment and getting a portion of the rent each month, imagine renting that place paying through a dollar balance on your phone.

ES: Because financial markets are less established and generally more unstable in Latin America, is there more of an opportunity for disruption than, say, the U.S., where things are fairly set in stone?

PD: Yes! People need to look outside the Bay Area or New York for opportunity. Real entrepreneurship is happening out on the edge, in countries where there are vibrant informal sectors that can get a further growth spurt from the added efficiency of startup products. In the case of financial products, we’re on the verge of a sea of change where the majority of global economic growth shifts to the informal sectors of economies around the world, System D as they call it – the world’s largest economy today, and more so in 10 years.

ES: There are a lot of startups in Latin America working with Bitcoin, like yourselves. What’s the community dynamic? Where are entrepreneurs and developers starting?

PD: We are looking into renting a desk at the Bitcoin Embassy and sharing space with some great companies trying to drive merchant adoption. The thing is, merchant adoption has way outpaced consumer adoption. I’m hoping we can work with some of those companies to drive them new customers and help them with their trade-flows. Xapo is in Buenos Aires as well, Wences Casares has lived in Chile and San Francisco, as I have, but we both apparently felt compelled to return to Interzone here in Argentina. We are having a guy from the Province who was making bots for MXCNow and Cryptsy come up to participate in a Mastercoin hackathon next week, so I like it that recruiting people with domain-specific, self-started experience is possible, those peripheral hires are the way that these things percolate over the years.

The community is nice, I like the meetings, but the emphasis has been on education. The trading systems we build are pretty sophisticated, and we do a lot of complex analysis, but that’s all to create infrastructure that enables a dumbing down for the user experience. I think as the startups get their game in gear, we’ll skip that educational, self-referential mode of defining community and it will turn more into actual communities in Argentina using the crypto-dollars to fund their events and talking up how tech made defying the law for economic advantage easy and possible. There’s a huge boilstream of counter-cultural activity in this society, and even though they used to like CFK’s monetary kabuki, they might just latch onto crypto-anarchy and turn this place some bright shade of interesting.