The temporary rental market is exploding all over the globe, but in Latin America, a gap remains. That's where aluGuest comes in.

The temporary rental market is exploding all over the globe, with offers such as Airbnb, HomeAway, Demeure, Wimdu and Segundo Hogar. And while it is also taking off in Latin America, a gap remains.

That’s where aluGuest comes in. An online marketplace for temporary rentals in Latin America, the Uruguay-based startup allows hosts to connect with potential guests through its simple, easy to use platform.

After a year and a half of development, the site launched three months ago and has been received well online and on social media. It already has 14,000 followers on Facebook alone.

Nearly 3,000 users are already connected to aluGuest, where they can find an offer of almost 2,000 ads in different parts of the region. The most popular destinations are Buenos Aires, Punta del Este, Santiago and Valparaiso as well as Fortaleza, Rio de Janeiro, Bogota, Playa del Carmen and Cancun.

Although the team hasn’t participated in any incubation or acceleration programs, they have received the support of an Argentine angel investor, who has injected US$60,000 into the project.

The aluGuest team is composed of Argentine entrepreneurs – Matias Perrone (CTO), Germán Sánchez (Design Director) and Gabriel Bourie (CEO). The three decided to base the business in Uruguay but plan to open up a branch in Argentina later down the line. Bourie chatted with PulsoSocial about a wide range of topics, including his own startup’s plans and his thoughts on Airbnb.

Jóse Martin: What led you to the idea of creating aluGuest?

​Gabriel Bourie: I’m passionate about startups, especially those related to travel and tourism. In 2008, I founded Welcome2BA, which is still a well-positioned company in temporary rentals in Buenos Aires. A while back, I noticed a trend among people of tourism being more oriented toward platforms of this kind, where 100% of the rent is paid up front and the guest’s money is protected until her or she has arrived at the property and found everything in order. Moreover, there’s the possibility of dealing directly with individuals, meeting new people and making friends.

JM: Beyond aluGuest’s Latin America focus, and keeping in mind that Airbnb is already present in the region, what is your added value?

GB: While there are companies like Airbnb in the region, there isn’t a monopolized market between one or two businesses. Moreover, I think that this concept of tourism and travel is relatively new and constantly growing, especially in our region, where there are many people who aren’t accustomed to renting an apartment or house from another individual.

The added value of aluGuest is the identity we give the site and its community, where we try to make our users in the region feel identified.

JM: You’ve been well received online and in social media. What does that signify in terms of users preferring aluGuest as opposed to Airbnb? 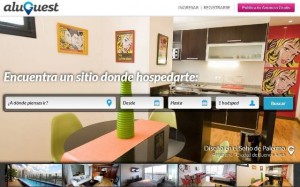 GB: In general, if we’re speaking of users who need to rent a property to make a profit, it’s very probable, almost sure, that they’re listing the property on two or three sites that work the same or similarly, thus ensuring a considerable amount of occupation throughout the year. On aluGuest, there are many users who also publish their offers on Airbnb.

With the respect to the user who utilizes the platform to travel, it’s a challenge. What aluGuest proposes is a safe, fast and accessible system for those who want to travel in Latin America, where we have experience.

JM: What do you think the main difficulty is in replicating a digital business model in Latin America?

GB: While Latin America doesn’t have an entrepreneurial ecosystem like Silicon Valley, where you find the biggest technology companies in the world, interest in countries like Argentina, Colombia, Chile, Uruguay and Brazil has grown a lot recently in supporting innovative startups and high-impact technological ideas in the region. I think it is a challenge for digital business entrepreneurs to find the right strategic partners to develop ideas and scale their companies.

JM: What sets you apart from other sites in the region that offer something similar?

GB: For users who publish one or a number of ads, it’s free. We’re a 100% transactional platform. We act as intermediaries in all payments made through the platform and protect guests’ money, guaranteeing they find the places as promised. Our commission is 10% of the net rate and always covered by the guest.

JM: What has your biggest challenge been in developing the platform, and how did you overcome it?

GB: The platform for paying and charging was, without a doubt, the biggest challenge we faced. When we started, we didn’t even know how to do it. Today, aluGuest can pay the host through a wide range of payment methods (wire transfer, ACH, PayPal, Payoneer, check) all over the world. We can charge guests with any credit card and PayPal.

​GB: By the end of this year, we hope to get more listings to satisfy the demand we have and continue to position our community, generating identity and knowledge of the site.