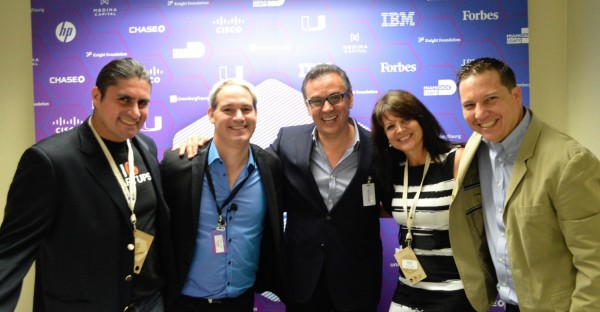 At eMerge Americas 2014, NXTP Labs and naranya*LABS announced an alliance to invest in and accelerate startups in Latin America – specifically, Mexico.

At eMerge Americas 2014, NXTP Labs and naranya*LABS announced an alliance to invest in and accelerate startups in Latin America – specifically, Mexico. The agreement is the culmination of a joint process to undertake an investment of at least US$8 million in Mexico, including funds from the Mexican government via INADEM.

“The Mexican government’s support in strengthening entrepreneurial capital for technology-based businesses is fundamental in driving companies created by the talent of innovators in Mexico and throughout the region. It’s an example to follow in other countries in Latin America,” remarked Arturo Galván, co-founder and director of naranya*LABS.

Through the alliance, Ariel Arrieta, Marta Cruz, Francisco Coronel and Gonzalo Costa of NXTP Labs will join forces with Galván and Pablo Salazar of naranya*LABS.

Salazar commented in an interview with PulsoSocial on the involvement of the Mexican government in the deal:

With the alliance, a seed capital and acceleration fund has consolidated to double the forces each accelerator has gathered separately. NXTP brings into the mix operations in Argentina, Brazil, Chile, Colombia and Uruguay and tacks on another major market – Mexico.

Now, the fund’s portfolio contemplates more than 150 companies. The objective is to reach a total of 300 Latin America-focused startups. Salazar discussed the strategies behind the agreement:

We are seeking to strengthen the entrepreneurial ecosystem in Argentina, Brazil, Chile, Colombia, Mexico and Uruguay through an investment vehicle in acceleration and early stages with more reach in the region. With this, we want to increase the opportunities for the region’s talent and contribute to job creation.

NXTP boasts a great amount of market knowledge as well as a strong trajectory in acceleration and investment – not to mention a very talented team. naranya*LABS, on the other hand, has experience as a mobile-centered accelerator. It is also backed by one of Latin America’s leading marketing and mobile commerce companies, Naranya.

“The alliance will operate the acceleration programs of NXTP Labs and naranya*LABS together, sharing methodologies and taking advantage of the strengths each program has in Argentina and Mexico,” Salazar explained. “Personally, I will be leading the fund’s operations in Mexico.”

He also added that although naranya*LABS has generally focused on mobile technologies, the fund will cover all digital technologies. “Mobile is one of the verticals, but we’ll stay open to other verticals,” he assured.

Ariel Arrieta, co-founder and director of NXTP, said that “this approval is a sign that Mexico is a solid capital market willing to lead technological innovation in the region.”

NXTP Labs is the only Latin American member of the Global Accelerators Network. In 2013, it received a US$5 million investment from the Multilateral Investment Fund. naranya*LABS is focused on technology-based companies in Mexico. Starting in 2014 and with the support of INADEM, it established Innovation Fund One, a seed capital fund for Mexican entrepreneurs.