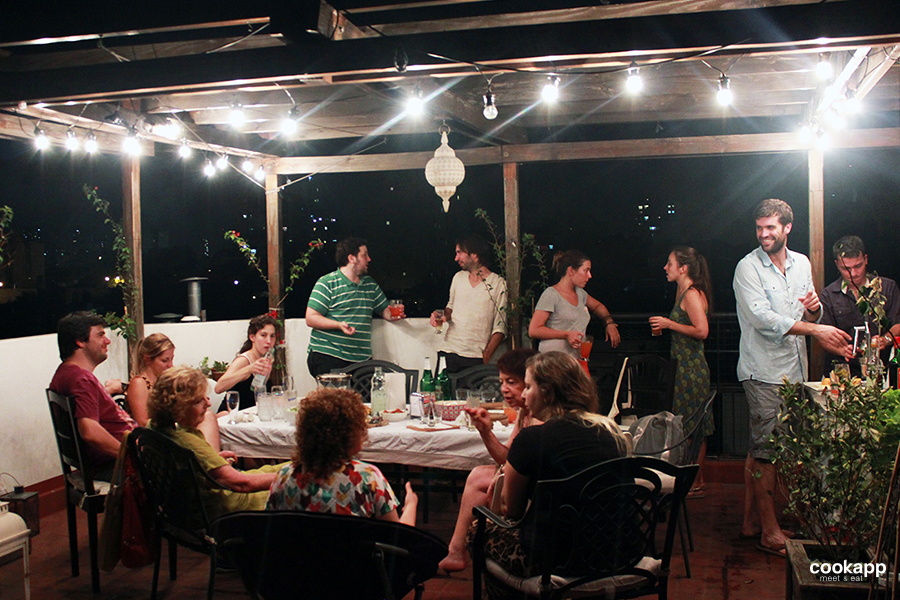 Cookapp has landed in New York City. The Buenos Aires-based startup that connects foodies with local chefs launched in the U.S. in February.

Based on the peer-to-peer concept, Cookapp connects food lovers with chefs in their areas. Private chefs who are pre-approved and vetted by the Cookapp team offer dinner parties and meals for other users to attend. They propose a menu, location, date and suggested price and invite friends, neighbors, tourists and other members of the Cookapp community. And all users need to do to start eating is sign up on www.cookapp.com or download the startup’s mobile app.

Cookapp combines the growing sharing economy trend with increased interest in unique social, culinary and social experiences. Up and running in Argentina for just a few months, Cookapp has already attracted more than 40,000 registered users and booked nearly 4,000 seats. In New York, it has already been used to organize 18 events and attracted interest from over 100 chefs.

Pedro Rivas, co-founder and CEO of Cookapp, filled us in on the details of the startup’s U.S. expansion.

Emily Stewart: It’s quite a leap to go from Argentina to New York City. Why take this straight to the States instead of regionalizing first?

Pedro Rivas: There are several factors that have brought us to the U.S. before expanding within Latin America. First of all, we believe the concept of Cookapp has universal appeal and potential to expand worldwide. The size of the opportunity is proportional to the size of the market, and the U.S. market is much bigger than any one market in Latin America. Since the cost and challenges of setting up shop in one country versus another is somewhat similar and not necessarily proportional to the size of the opportunity, we believe it’s wise to invest in the bigger markets first.

Furthermore, while many innovative business models already have a strong incumbent in the U.S., this specific model does not. This is despite the enormous fit we see between characteristics of the model and the American culture and lifestyle. For example, large amounts of people in the U.S. already use technology (web, smartphones, etc.) regularly to find things to do, to search for places to eat, to interact with others, to buy things and even to find friends or a date. In addition, people are generally more transient and tend to be more open about meeting new people. In the bigger American cities, there are also lots of immigrants, which translates into many different flavors available within a single geographical location.

These are only a few of the many factors that have led us to choose New York as our first city outside of Argentina. The plan is to quickly expand Cookapp into other American cities soon and then proceed with further international expansion in the future.

ES: How do you vet first-time chefs? To what extent are you liable, in both Argentina and the States, if something goes wrong?

PR: We have chefs go through a process where we review three main aspects: if they can cook (history, credentials, etc.), how good of a host they may be (amicable, fun, service-oriented, etc.), and safety and cleanliness (if their venue fit for hosting, in a safe neighborhood, clean, etc.). Part of this process involves sending a Cookapp representative to meet with the chef prior to the event in order to check all of these aspects. We frequently also use this opportunity to take pictures of their food and taste it!

In addition to our own approval process, Cookapp works as a marketplace, where users are encouraged to upload their reviews of past events and chefs. The bigger we become, the more reviews we will have, which will give future users even more confidence and information regarding events they are interested in attending.

On top of all of this, we also have a general liability insurance that covers the chefs in case anything goes wrong. Of course, this insurance is there as an additional safeguard, but with the many layers of quality control we have in place, we do not expect it to be used.

ES: How have you noticed the U.S. audience has reacted to this differently than in Argentina? What’s been the same?

PR: We have found both similarities and differences between the two markets. Different markets are like different regional cuisines: the basic ingredients (meat, rice, salt, etc.) can be the same, but the spices and final flavors are a bit different.

In both markets, we have seen a higher ratio of women than men signing up. Ratings have been consistently high (>95% of users in both markets have rated an event 4 or 5 stars out of 5), and more than 25% of guests write reviews.

As far as some of the differences, while we see more couples and groups of people booking seats together at Cookapp events in Argentina, we have observed more “single” people reserving seats in the U.S. (2.2 people/reservation in Argentina vs. 1.5 people/reservation in the U.S., on average). Another interesting difference is mobile adoption (the percentage of users in the U.S. who have downloaded our mobile app for iOS and use it to find and book events is significantly higher than the percentage in Argentina).

ES: What would your advice be for Latin American startups looking to launch in the United States?

PR: The sheer size of the market can be intimidating at first, but if you put together a cohesive strategy and go step by step, you’ll see at the end it is not so different from launching in another country. Like in any international expansion, you’ll need to tropicalize a bit. What worked in Argentina might need tweaking in order to work here. Having someone onboard who is physically in the U.S. and knows the market well can save you from running into unnecessary obstacles.

Furthermore, you’ll need to evaluate which functions should to be performed locally and which ones can continue to be performed in the region taking into consideration the output needed and also the cost. Things like notarizing a legal document and other commoditized services tend to be trivial and cheap in the U.S., but salaries and tailored services can be very expensive (lawyers, engineers, etc.). Study the team and the resources you have at hand and you might even find some great leverages over a local competitor.