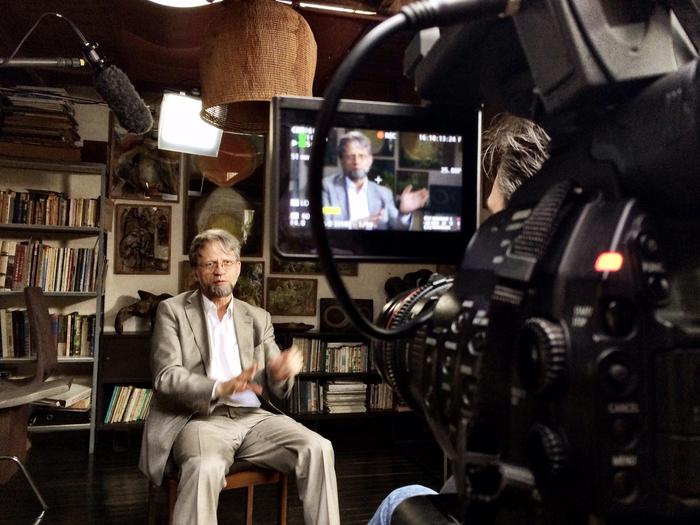 With the help of crowdfunding, filmmaker Andreas Dalsgaard seeks to complete his documentary, Democrazy, on the changing political landscape in Colombia.

Colombia’s political landscape is changing, today looking very different from what it was 20, 10, even five years ago. Now, one documentary is in the works to highlight the country’s evolution. And in order to reach the world, it is leaning on crowdfunding for help. The film: Democrazy. The platform: Kickstarter.

Democrazy is centered around Antanas Mockus, a rather unlikely Colombian politician. Educated as a philosopher, Mockus served two non-consecutive terms as mayor of Bogotá, first being elected in 1995 and again in 2001. He became famous for rather peculiar and often humorous initiatives, including hiring mimes to police traffic. During his first term, he managed to cut the city’s homicide rate by 70% and traffic fatalities by over 50%. Mockus also made two unsuccessful bids for presidency, losing his last campaign in 2010.

Five years ago, Mockus caught the attention of filmmaker Andreas Dalsgaard. Intrigued by Colombia’s political landscape and Mockus’ role in it, Dalsgaard made the film Bogotá Change in 2009. Now, he’s wrapping work on Democrazy.

While the filmmaker has received the backing of major players in the industry, including Oscar-nominated producer Signe Byrge Sørensen and The Act of Killing director Joshua Oppenheimer, he is making an appeal to the crowd to finish up. He has launched a US$60,000 crowdfunding campaign on Kickstarter, which comes to an end this Friday, March 28th.

But why crowdfund instead of going more traditional routes for getting capital? According to Dalsgaard, the decision is a mix of necessity and strategy:

First of all, we chose to crowdfund because we really need the financial support. Despite access to other terms of funding, we thought this project was well suited for a crowdfunding campaign. What we have realized in the process is how much work it demands to make a strong campaign, and how many other benefits come with it – building an audience, creating ambassadors for the film, activating media and learning how to frame the story better. It’s a great tool to position the film before it’s done. And, perhaps, in the end these benefits might prove more valuable than the funding itself.

The Democrazy team is well on its way to reaching the magic number on Kickstarter, having raised over US$52,000 when this went to press. A large number of the film’s backers are Colombian, though bigger pledges have come in from Europe and North America. “I think this story is of universal importance, and we see how it engages a lot of people without previous knowledge of Colombia. People who care about improving their own democracies, and who see the pitfalls of how democracy and political machineries operate today,” Dalsgaard reflected.

The Democrazy project doesn’t have a specific appeal to traditional investors looking for returns, the filmmakers have been approached by a few who are “willing to take the risk connected with a political doc.” Dalsgaard also noted a unique tie with the Colombian tech community in this endeavor:

About the tech scene in particular, I think they represent a growing urban middle and upper class, which is well educated and innovative. They have been the main supporters of the main characters of Democrazy, whose political activism has been fuelled by the use of social media and innovation, driven by these very same young people. This is what the film portrays.

As mentioned, the Democrazy crowdfunding campaign comes to a close this Friday, March 28th. Those looking to learn more about project and contribute can do so here.

With the film, Dalsgaard seeks to portray a changing scenario in a country that is often widely misunderstood. And he’s applying a technology-driven concept to do so.

“I think Colombia is changing, indeed. The reasons are of course complex and multifaceted. But what’s important is to understand is that Colombia is a strongly urbanized country, with many well functioning cities, a well educated middle class and lots of innovation in culture, tech and other areas,” he concluded. “The image of guerillas in the jungle, which we connect with Colombia, is very different from how the great majority of the population lives. The conflict has always taken place outside these cities, which have developed as urban economy drivers surrounded by armed rural conflict.”