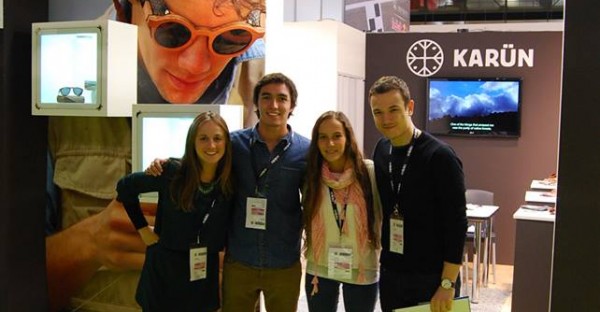 Thomas Kimber has built three sustainability-focused companies in his entrepreneurial career. The kicker: he’s only 24.

Thomas Kimber has built three sustainability-focused companies in his entrepreneurial career. The kicker: he’s only 24.

In 2011, Kimber found himself studying commercial engineering at Universidad Adolfo Ibáñez, quickly realizing academia wasn’t for him. He wanted to be an entrepreneur. “I felt like I was wasting time. I wanted to do something with my life beyond studying a field that has nothing to teach you,” he explained in an interview with Asech.

After leaving school, he founded reforestation campaign Reforestemos Patagonia and sustainability platform ClanEco. Today, he is dedicated to Karün, an environmentally friendly company that sells sunglasses made out of native wood taken from the trees of the Chilean Pagatonia and other areas of southern Chile. Its processes are 100% sustainable, and in 2014, the company will roll out new product lines and go after the European market.

We caught up with Kimber in the context of Meet in Chile.

Camila Carreño: Why did you decide to become an entrepreneur?

Thomas Kimber: Because I want to make big changes in the world. The economic model we’ve followed over the past century is destroying our planet. I want to demonstrate that things can be done differently.

CC: What has your experience been starting a business in Chile? What needs to be improved?

TK: It’s been hard, but I’ve learned a lot. I think what’s lacking most is support from private entities and a vision of innovation. It’s hard to compete on a global level without solid financing, and for that to exist, there has to be more risk capital from private organizations.

CC: Do you believe that sustainability is a challenge for new entrepreneurs?

TK: In my opinion, innovation doesn’t exist if it’s not tied to sustainability. I think that anyone considering developing their own project should think of it from a sustainable perspective – economic, social and environmental. It’s the only way for what we do to endure in the long term. I don’t see the value in something that generates economic profitability without consideration of environmental or social ramifications.

When it comes to events related to entrepreneurship and innovation, Chile isn’t lacking. And this week, there’s a new player on the block – Meet in Chile, a monthly gathering that brings together well-known entrepreneurs to interview one another regarding whatever they want, except for business. The idea is for attendees to get to know the lesser-known aspects of successful entrepreneurs.

The inaugural Meet in Chile event will feature a conversation between Iván Vera (founder of Innspiral y Rasu) and Thomas Kimber. The latter shared with us his take on such gatherings:

In general, I think they’re a good thing, because they motivate people who have the entrepreneurial bug to take action. I don’t know if I see them as something necessary, because if someone really wants to or has to start a company, he or she will do it anyway. I worry that in talking so much about entrepreneurship, people who haven’t actually done it get the idea that it’s something easy and therefore start out with the wrong expectations. If that happens, it’s more likely that they’ll give up at the first sign of difficulty.

However, Kimber recommended the event. “I believe it’s a different opportunity, a more relaxed and personal way to meet new people in the entrepreneurial field.”

The very first Meet in Chile event will take place tomorrow at en The Green Club. Get your tickets and learn more here. 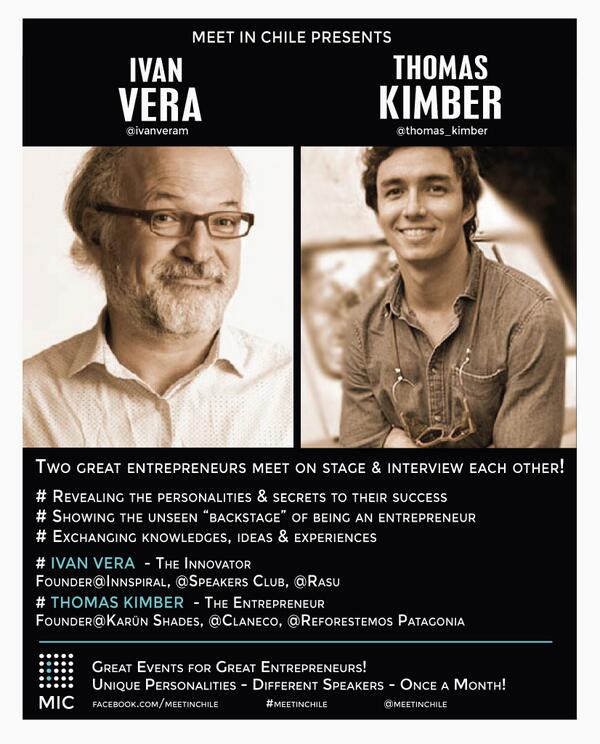