While cell phone penetration rates in Latin America are high, smartphones are still lacking – and the country-by-country breakdown may leave you surprised.

While most Latin Americans own a cell phone, not many of those devices are of the smart variety. Moreover, the countries where mobile device use is most prolific aren’t exactly the usual suspects.

According to a recent Pew report on internet and mobile technology in emerging markets, Chile, Argentina and Venezuela lead the way in mobile phone penetration rates. Ninety-one percent of Chileans, 86% of Venezuelans and 83% of Argentines own a cell phone; however, just 39%, 31% and 34% of those devices, respectively, are smartphones.

As for the rest of the region, 81% of Bolivians, as do 80% of Brazilians and 79% of El Salvadorians have cell phones. The real surprise is Mexico, where just 63% of the population has a cell phone – though a surprising 21% are smart. Globally, Latin American markets run the gamut in terms of rankings, with Chile up there with Russia and South Africa and Mexico closer to Uganda and the Philippines.

The report also notes that, globally, the pervasiveness of cell phone ownership is closely tied to the lack of landlines. Across the 24 countries contemplated, a median 23% have working landline phones in their homes – in other words, many people are going straight to mobile technology.

Also worth noting is the age question, especially when it comes to smartphones. Those under the age of 30 are much more likely to have an iPhone, BlackBerry or Android device. In fact, 55% of people between the ages of 18 and 29 have a smartphone in Chile, and 50% of individuals in the same age group do in Argentina. And those with a college degree are more likely to own a smartphone as well.

So what are people doing with their cell phones? Texting, of course. An overwhelming majority of Argentines and Venezuelans do so (93% and 94%), while the medium hasn’t quite taken on in El Salvador (47% of respondents said they text).

Across the region, cell phone users also like to take pictures and videos and, to a lesser extent, access social networks and get news.

Where the region’s consumers remain hesitant is in the arena of mobile payments. While 18% of Venezuelans use their cell phones to make or receive payments, the same can be said for only 3% of Bolivians, 5% of Brazilians and 9% of Argentines. 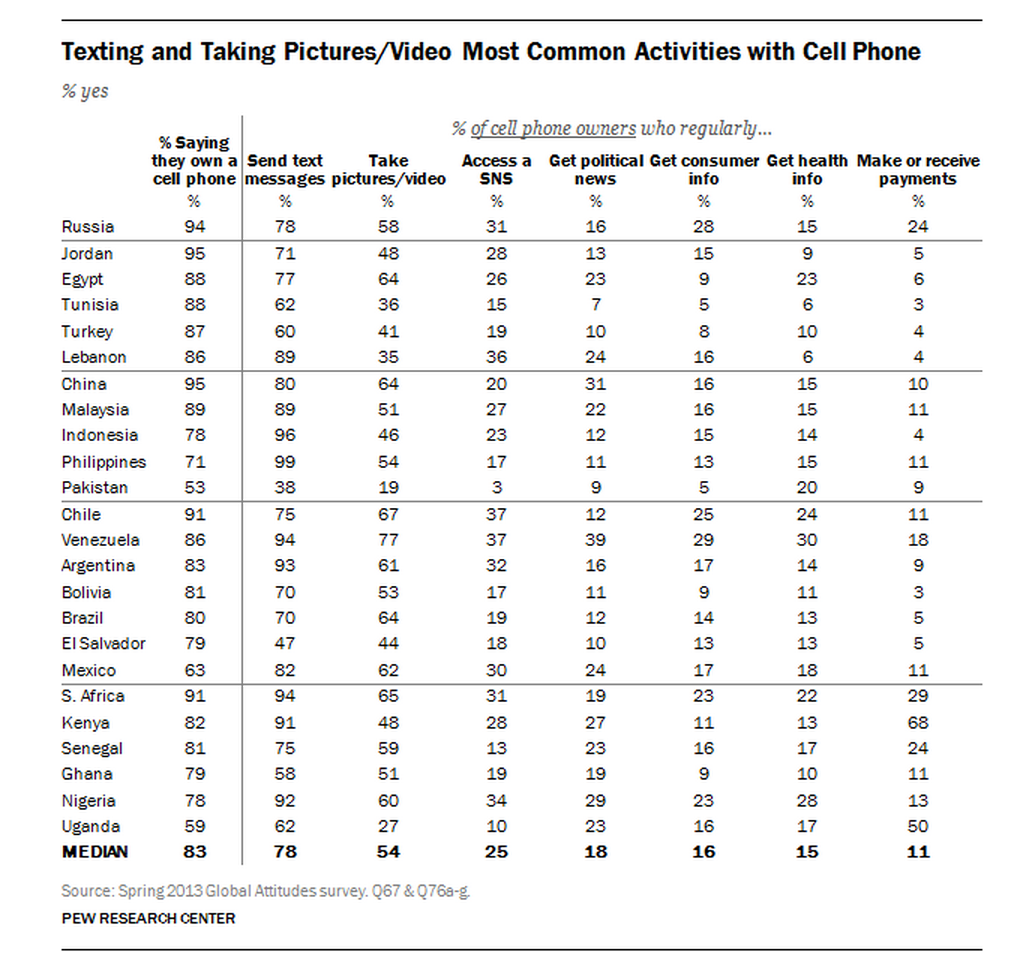 Internet and social networking are also explored in the report. The conclusion: once people are online, it doesn’t take long for them to start using social media. Venezuelans seem to be the quickest to do so, with 83% of the internet population using such sites. Surprisingly, Brazilians are among the most hesitant to do so, with 27% of users deciding to stay away.

Apart from social inclinations, the study reveals just how closely correlated internet use is with income. The higher a country’s per-capita GDP, the higher its percentage of internet users. Put simply, richer countries get online more and faster.