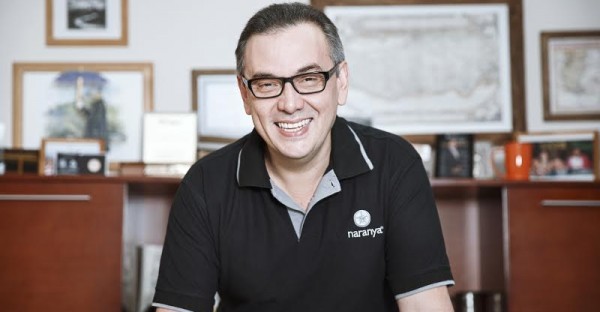 Arturo Galván, head of Mexico's naranya*LABS, talks why the accelerator has gone international and the benefits of niche acceleration.

Yesterday, the selection panel for the second edition of the naranya*LABS acceleration program came to a close. Now, a group of over 30 startups remain in wait to find out which 12 will be chosen for the upcoming process.

For this latest edition, the mobile-focused naranya*LABS has implemented a fundamental change and will be accepting startups from outside of Mexico for the first time. Applications have been received from India, Israel, Singapore and other Latin American countries as well.

Arturo Galván, the founder and CEO of naranya*LABS, discussed the challenges facing the new generation of entrepreneurs as well as the implications of an international call and what it means to be a vertical accelerator.

Clarisa Herrera: What do you make of what you’ve seen over the past two days?

Arturo Galván: They’ve been marathon-like days, but satisfactory. There is already one naranya*LABS generation, but this is the first time we’re doing it internationally. The global call was open to projects looking to launch their products in emerging markets – not just Latin America – and that are 100% focused on mobile or have a major mobile strategy.

CH: Why the change? Why open a global call?

AG: It is a global call because we want the world to see naranya*LABS as the leading mobile-focused accelerator. We are a vertical accelerator in a world of horizontal accelerators. Vertical, in our case, implies mobile and emerging markets. Were the most important player in mobile commerce and mobile internet in Latin America, and now, we’re expanding into other emerging markets. We’ve managed to develop that “muscle” with which we can support startups in the industry and ensure their success. The companies we’ve evaluated come from 14 countries, including Ukraine, Israel, India and Singapore as well as Latin American nations like Argentina, Chile, Brazil, Guatemala and Colombia.

CH: Speaking of vertical vs. horizontal acceleration, what favors startups?

AG: I think that in the industry, specialization is where the market is headed. Going into an accelerator specializing in mobile means that you get expert mentors in the mobile sector, a network of relationships tied to the industry, given that we’re a business that has been dedicated to the mobile world for 11 years. If mobile is your core, you should at least prefer an accelerator with that specialty. Take, for example, medicine. If you’ve got the flu, you’re going to go to a general physician, but if you’re pregnant, you go to a gynecologist.

CH: Your objective is for startups to scale regionally. Why not go global?

AG: The startups we selected come to us because they’re interested in launching in the region. Some of them are designed as global products, others for emerging markets. Whatever the case, Latin America is an increasingly attractive region for launching products, due to internet and mobile technology penetration. I believe that local companies have a principal focus on becoming regional. Most of the projects we’re seeing are born in a country with the idea of reaching the rest of LatAm. We see ourselves as a door of entry to other countries. There are, however, some with the idea of going global. The key today, in my opinion, is being regional, because it’s an attractive market that is simpler and less competitive.

CH: What have you seen in the selected entrepreneurs at a human level?

AG: Because we received applications from more than 120 companies, we did a pre-selection, and the 33 that made it are at a very high level, with solid, complete teams. We’re seeing business profiles, technical and design. Complementarity in this business is a major necessity.

CH: What process will the selected startups go through?

AG: The acceleration process will start in March, and the teams will have to move to Monterrey, Mexico for 16 weeks. We have co-working spaces in Monterrey and Mexico City and, through alliances with other accelerators, in Buenos Aires (NXTP Labs), Colombia and Brazil. We’re about to get spaces in New York and Silicon Valley as well. They’ll receive access to our network of more than 120 mentors on topics like mobile marketing, mobile commerce and even business administration and taxes.

CH: What do they get access to and under what conditions?

AG: We invest US$40,000 (half in cash, half in kind). In exchange, we get about 10% participation. The idea is that at the end of the four-month period, they’ll already be raising their next round of capital. We have a network of investors for the next phase. In these four months, we look at which startups are the best matches for investors and start to approach them. In parallel, Naranya is launching an initiative to raise an investment fund, the idea being to have the resources needed to invest in the next round.

This text has been adapted and translated by Emily Stewart form its original Spanish publication.