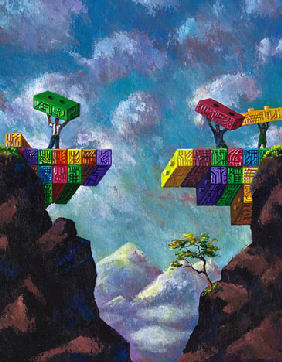 A look at what needs to happen in Latin America to close the digital divide.

We spend so much of our time online on our phones and laptops that is easy to forget that many people don’t have access to the internet or do not even know what a computer is. We are so used to hearing about income and economic inequality that we don’t see that ever widening gap between the rich and poor people in the world is also brought about by technological progress. This barometer is the digital divide.

The internet is a difference-maker in our lives. It allows us to access information, to communicate remotely and raise our productivity. It also enriches education, creates jobs, improves public services and expands participation in the democratic process.  However, despite its benefits, only a rough 35% of the world population has internet access.

What is, then, the digital divide? Today, the term has become shorthand for any gap between individuals, groups, businesses and geographic areas with regards to both their opportunities and access to information and communication technologies. Technology and internet access constitute one of the key variables that determine a society’s position in the worldwide human development index.

Connectivity: About 250 million people have internet access in Latin America. That means that 42% of the 600 millions that live in the region are connected. Perhaps the most important question is what needs to be done to include the remaining 58%.

Disparities: The region is far from being a homogenous block. While some affluent portions of the developing world have managed to integrate themselves into the modern IT system, a big majority of poorer areas within countries continue to live in the dark. Whereas internet penetration reaches almost 70% of Argentina’s population, other countries such as Cuba and El Salvador are below 25%. Great disparities are also encountered inside countries, between urban and rural regions.

Infrastructure: The integration of new information and communication technologies needs to be a core strategy to generate new learning and employment opportunities for the future. That is why governments across the Americas are investing in infrastructure to expand digital access. However, public initiatives need to be coordinated together with private investment.

Speed: When we think about connectivity, we immediately think about speed. The European Digital Agenda has set some standards regarding internet speed. The aim is to reach 100% of home connections with 30 Mbps and at least 50% of subscribers with internet speed more than 100 Mb. The truth is that Latin America is far from closing this gap. Today, the main priority is to spread connectivity.

Internet Use: The digital divide cannot only be fixed by spreading connection and having more computers and smartphones. It is also the differences between groups according to their ability to use technology effectively based on their different levels of literacy and capability. Studies show that the mere access to these devices does not necessarily translate into improved learning. Generally the internet is mostly used as an entertainment tool, when in fact, other used could be promoted: communication, education, innovation and cyber activism, among others. Essentially, it should be summarized as a problem of penetration into the daily spheres of work and life.

Tech Companies: Latin America’s software industry plays a critical role when addressing the digital gap by developing technology experts and promoting infrastructure investments. Undoubtedly, the region’s capacity to produce technology has grown over the last decade, positioning itself a world-class outsourcing destination. Tech clusters have been created in almost every major city of LatAm, and this will ultimately have a cross-market impact on other industries, as well as in our societies.