PedidosYa has taken the culture of delivery in Latin America to another level. Back by key venture capital actors in the region like Kaszek Ventures and Atomico, the Uruguayan startup has managed to expand its presence to a total of nine markets (Argentina, Brazil, Chile, Colombia, Peru, Puerto Rico, Uruguay and Venezuela) in just four years.

The PedidosYa network encompasses 7,000 restaurants throughout the region, its platform receiving over one million visits each month. Currently, the startup is in the process of launching in Mexico.

PedidosYa is a pioneer in Latin America’s online food delivery industry, a market that’s become pretty crowded over time. Álvaro García, CMO and Founder of PedidosYa, discussed his vision of the market and the milestones his startup has reached since launch.

Clarisa Herrera: In four years, you’ve managed to create a successful startup and contributed to the transformation of cultural habits. Looking back, what’s your take on everything? 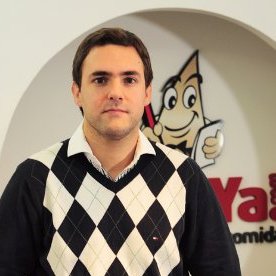 Álvaro García: We started out with an idea while we were in college – three students in 2009 at ORT University in Uruguay. The idea was for a website where you could order food from various websites, based on problems like moments when a phone is out of reach or you’re brought the wrong order.

CH: And that culture of delivery, did it have the same echo throughout Latin America?

AG: A rise in gastronomic variety is already happening in a number of countries. Delivery isn’t just pizza and empanadas, it’s sushi, Arab cuisine, Thai. We launched in Uruguay in 2010 with 40 restaurants, and our restaurants and we have grown month after month without investing anything in marketing beyond positioning ourselves in Google. Having in mind that Uruguay isn’t a country for modeling e-commerce, we had to launch in Argentina and Chile and become a reference in Latin America. In Brazil, we had to adapt a little bit to the nature of the market. That’s our main bet, because the culture is so rooted in e-commerce. Mexico was the second step of expansion, but it was put on stand-by until we were able to consolidate our service in other countries, like Colombia, Venezuela and Peru. We’re already experiencing solid business there, and we’re very happy.

CH: What do you consider before landing in a new market?

AG: Prior to launch, we look at the population, the economy and whether or not it’s growing, consumers, smartphone sales and, apart from that, whether there’s a culture of delivery. Argentina and Uruguay, for example, are countries with a significant culture of delivery. Brazil and Mexico are growing significantly in that sense.

CH: You were among the first to put out an online delivery product in the region, but a ton of startups have popped up doing the same thing since then. What’s the panorama for you?

AG: Competition is good news, because it means the business works. It’s natural for competitors to emerge. Though we’re an emerging economy, e-commerce is growing in Latin America, so there’s a market. Moreover, 90% of consumers are still ordering online. Our competition is the phone and the magnets on the refrigerator. Other actors promote the development of the culture of online delivery. I believe that, for example, Groupon has opened the door for e-commerce sites like us, helping people get over their fears of buying online. Regionally, there’s no competitor like us, no one that’s achieved the growth we have.

CH: You’ve received investments from leading VC players in the region. How does their participation condition or benefit your situation?

AG: It just helps. Venture capital has been crucial for our business. We’re a long-term business that’s attempting to generate a culture, a lifelong service. We’re not a company that’s going to be around for a year and disappear. We’re not a fad. That’s why we’ve had to accelerate the business even though we can grow organically. Ours is the typical Silicon Valley story – a company that raises seed capital and then more capital to invest more in the product, in marketing, etc. VCs give you money and intellectual capital, but first, we had to validate the concept. Obviously, you have to select who gives you that money. In our case, it wasn’t going to work with someone expecting short-term returns because of the type of business we have. The rules can change, and it’s trial and error, so we needed people with experience and who are on board with the path we’re on.

CH: What’s the importance of mobile in your business today?

AG: We developed an application for iPhone and Android, keeping up with this sort of mobile furor. It was an experiment, and we weren’t expecting much, but we were surprised. Within a month, 4% of orders were coming from the mobile channel, and today, 41% are. It’s ideal for people who are at home hanging out and don’t want to turn on the computer.

AG: We’re still in diapers. We’ve got very interesting things planned for this year and are focused on improving the product. We’ll have to invest more in mobile and tablets and incorporate online payment methods, especially in Argentina and Uruguay.