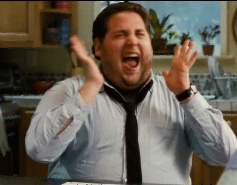 U.S.-based Wayin has announced the acquisition of Argentine startup Comenta TV. Twitter had a lot to say about it (and celebrating to do).

Just last month, Juan Melano sat down with PulsoSocial to discuss just how well things were going for Comenta TV after being selected as a technology partner by Twitter. Also at the heart of his dialogue was how the company’s pivot made the difference in its success.

And today, there’s even more good news for Comenta TV. U.S.-based Wayin, a platform that leverages social media across various consumer channels, has announced the acquisition of the company for a sum that has not been revealed.

Through the deal, Wayin will incorporate Comenta TV’s set of broadcast and audience measurement technologies, which are unique in the global market. Comenta.TV actively provides on-air Twitter integrations for some of Latin America’s top television shows and provides actionable insights into TV networks across 11 countries and three continents.

Together, Wayin and Comenta TV will provide content curation services for any screen, in multiple languages and simultaneously. They will develop a complete analytics dashboard for measuring campaign effectiveness in real time, with Wayin gaining access to 11 new countries and 12 industries through the deal.

Negotiations were spearheaded by Wayin CEO Elaine Wood, who sees the operation as a valuable element of the company’s global expansion strategy. “We looked at a lot of options and found Comenta TV to be unique in providing television producers real time intelligence into how audiences are engaging with their shows.  Wayin sees this as an indispensable value to producers and networks in their quest to further engage their audiences while maintaining creative freedom,” she remarked in the acquisition announcement.

Since its 2011 launch, Comenta TV has built its business on three continents, working with high-profile television activations like Viacom and numerous TV networks and events across Argentina, Colombia, Chile, Venezuela, Brazil, Peru, the United States, the United Kingdom, France and Spain. “We share a vision for the future, passion for technologies that enable change and now capabilities that make us stronger as one,” Melano reflected in the release. Moving forward, he will lead the TV development group out of Buenos Aires.

“The next wave of business to consumer innovation will be built upon the backbone of real-time social data,” said Scott McNealy, who founded Wayin. “The opportunity to leverage consumer-driven experiences across all areas of industry and all areas of the world is massive.”

Comenta TV was one of the first startups accelerated by NXTP Labs (this deal marking the organization’s fourth exit). It has also passed through programs at Start-Up Chile and Wayra Argentina.

The Twitterverse exploded with the acquisition news this morning – in Latin America and all over the globe. Here’s what people had to say: 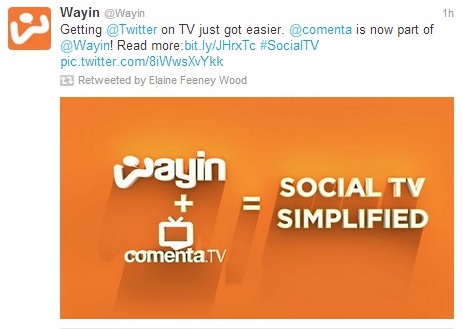 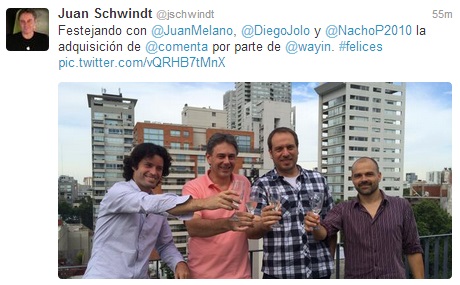