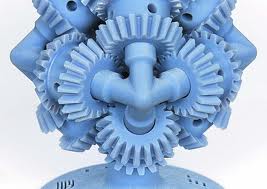 By now, most of us have already heard of, seen or touched 3D printing. But can we say we are witnessing a new industrial revolution in the making?

By now, most of us have already heard of, seen or touched 3D printing. It’s here. It’s getting better and cheaper on a weekly basis.

According to Jeremy Rifkin’s The Third Industrial Revolution: How Lateral Power is Transforming Energy, the Economy, and the World, published in 2011, industrial revolutions take place when new communication technologies converge with new energy regimes.

Regardless of the definition, one thing that we can agree on is that it implies a dramatic change in the way we manufacture physical things, which is inevitably related to the available energy matrix. The result will obviously affect the economy, communications, culture and, thus, the whole of society.

We’ve been living an information and communications revolution for decades thanks to the sophistication of radio, TV, the film industry, increasingly efficient printing technologies (2D) and our more recently beloved internet. The last has allowed information to be shared at a scale never seen before in history, creating a new economy, partly based on this new information stock and the network through which it flows. We had never experienced the immediateness of access to information as we are living it today. For many it is true bliss.

But what if the immediateness of access to information gave way to the immediateness of access to solid physical products? Like if we had a Replicator from Star Trek– a machine capable of creating objects by rearranging sub-atomic particles to form molecules and arrange those molecules to form the desired object. Oh, but that’s so Sci-fi. Or is it? The development of this technology is actually underway. Of course it’s still not as classy and perfect as Star Trek’s Replicator, but, eventually, it probably will be.

Many additive manufacturing systems have been patented since then, but the most popular method used today is FDM (Fused Deposition Modeling), which was patented in 1989 by Scott Crump, the co-founder of Stratasys (the company that bought MakerBot earlier this year for US$403 million).

There’s no doubt that 3D printing is a revolution in itself. 3D printing has become so cheap that very soon the whole manufacturing industry will be upside down– its reach is almost universal. From impacting the space industry by allowing tools to be printed onboard on demand (meaning less weight to be taken into orbit), to printing prosthetic body parts, dental pieces and molds, living tissue organs, food and almost any object you can think of. The fact that all these items can be made locally and in any desired amount means also that concentration of production, shipping and selling tends to become obsolete. Each time a 3D printer is sold, it’s probable that a handful of Chinese workers are doomed to lose their plastic manufacturing jobs. The structure of the global economy is literally starting to be reshaped.

And while we populate our houses, schools and offices with all sorts of 3D printers, embracing the new hardware open-source toy, Nanotech continues decades of solid work around the same concept but with different materials and on a much smaller scale. It’s just a question of time (two or three decades) before we’ll be replacing our old polymer based home/office 3D printers for the real Star Trekian devices with god-like capabilities that will allow us to print with sub-atomic resolution. From living lizards to free energy magnetic motors to loaded 9mm guns and working iPhone42s, no one knows the limit of what we haven’t yet invented…but we’ll be able to print it.

It may be a philosophical question yet to be answered if 3D printing is the star of the Third Industrial Revolution, a consequence of it, or just another of its players. But whatever shape it takes, let’s hope we make the best of it. The past is gone, the present is a gift and the future is ours to 3D print.