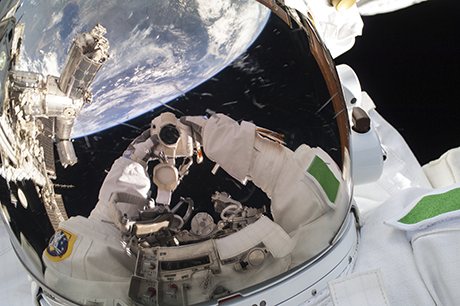 New iOS app, React Messenger, is capitalizing on the selfie trend, though its proposal is much more ambitious.

The Oxford Dictionary declared “selfie” the 2013 word of the year, and given Kim Kardashian’s recent how-to guide on snapping the perfect solo pic and even President Obama’s apparent (and ridiculously controversial) jump onto the selfie train, it’s not going anywhere soon – like it or not. A new application, React Messenger, is capitalizing on the selfie trend, though its proposal is much more ambitious.

“We think React has a much wider appeal than other apps within the ‘selfie’ market,” reflected Pedro Alejandro Wunderlich, who alongside business partner Andres Canella created the app. “Our initial growth will certainly come from teens, but anecdotal evidence suggests an older crowd is enjoying the service too. Couples, families, college students, etc.”

What is React Messenger? Essentially, it’s an instant messaging application that captures users’ reactions with each and every message they send. It snaps a picture with each bit of text sent out, a sort of combination of Snapchat and WhatsApp.

Launched for iOS just three weeks ago, the numbers the app is experiencing are quite astonishing. React has already reached 100,000 downloads and three million messages (meaning three million pictures) sent. Users are spending around 25 minutes with the app on average each day, with the top 25% spending almost an hour.

What renders the case of react especially interesting is the profile of one of the professionals behind it. A Guatemalan native, Wunderlich has an extensive career trajectory in startups, with expertise in communications, user experience and design. Also worth noting: he’s always gone at his projects with a global focus.

Wunderlich explained his path to React, reflected on the selfie trend, and discussed his perspective as a Latin American entrepreneur with a global point of view.

Emily Stewart: You’ve got quite the career trajectory and have worked on some pretty successful projects. How did you arrive at this?

Pedro Alejandro Wunderlich: After working on our previous project Wake N Shake for over a year, we were ready to move on. We sought to “disrupt” very large markets. The messaging space is one that we thought has been slow to innovate. Stickers and emoticons are the current craze, but it’s hard to imagine they’ll be regarded as modern in a few years down the line (for us, they already seem very web 1.0).

If technology is helping us connect with each other in wonderful ways, we feel emoticons and stickers are a step backwards – they force the user to personify drawn characters to convey their personality and emotion. We want to move past these, and allow people to convey body language and personality naturally.

We arrived at React Messenger with the vision of making people feel as connected as they do via video chat, while retaining the practicality of instant messaging.

ES: You’re definitely capitalizing on the selfie trend. What makes you think this is a long-lasting thing? You don’t think people will get over it? 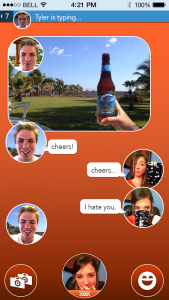 PAW: We started work on React Messenger over a year ago, before the “selfie trend” began. It’s a nice coincidence, and it has helped us sell the idea. The foundations are much more solid and sustainable. Our vision is not really a “selfie” messenger, but more of a “natural expression messenger.” Facial expressions are a large part of effective communication, and thus, not part of a trend.

In summary, we’re using the term “selfie” as a marketing strategy for now.

ES: Does every message have to be sent with a picture? Are you worried that gets a bit daunting?

PAW: Yes, React adds your facial expressions with every message. And whether or not it’ll get daunting, so far, the answer is no. Engagement is very high, and the percentage of returning users is very high as well. People are using it, and using it a lot. Users have sent almost three million messages in the three weeks we’ve been out.

My prediction is that, similarly to video chat, people will use it in certain parts of their day to connect with friends and loved ones in a particular way that can’t be done via traditional messaging. We’ll keep an eye on usage metrics, and adjust the app as needed.

ES: There’s a lot of talk about Latin American entrepreneurs going at it with products that are global from the start, but there are few who are actually doing it. Why do you think that is? What’s your advice for them, giving that it’s exactly what you’ve been doing?

PAW: I can talk specifically about what I’ve observed in Guatemala. There’s a sense of security and less risk when someone comes up with an idea to sell to his or her own people. They know the culture, they know their needs, and probably have a few connections locally to help get the project off the ground. There are probably a few successful startups that have started this way.

But I think it’s a much bigger risk to take the local approach than a global one. Since there’s perceived lesser risk, there’s probably more competition. Milestones are probably less ambitious. Standards are most definitely lower when one is not competing at a global scale. So the product suffers, the goals suffer, and the startup has much less probability of success. This of course, is specifically of tech startups. Someone seeking to open up a local restaurant has no other option than to think locally.

We’ve been pleasantly surprised on how the global community tends to share the same problems. When an entrepreneur has a problem they’re seeking to solve, there’s likely a bigger market around the world than in his own country.