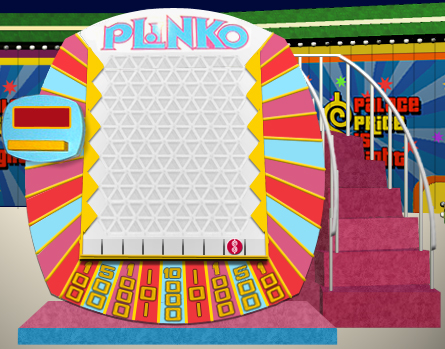 CataMoeda seeks to encourage Brazilians to utilize forgotten or accumulated change by offering tangible incentives in the places they shop every day.

“Our solution, an innovation in Brazil, will reduce the costs and difficulties derived from the lack of small change, a problem commonly seen in retail in Brazil,” explained Paulo Bobillo, describing the value of his product, CataMoeda, in his local market.

CataMoeda is a Brazil-based startup designed with one single purpose in mind: putting coins back into circulation. The company seeks to encourage Brazilians to utilize forgotten or accumulated change by offering tangible incentives in the places they shop every day. Bobillo outlined:

We have seen in more mature markets, such as the United States, that this solution motivates people to bring, once forgotten, accumulated small coins back into the economy. The most attractive channels are supermarkets, pharmacies, convenience stores, malls, bus and train stations, and airports.

In Brazil, CataMoeda is already operating in Condor supermarket chains in Paraná.

So how does it work? The process is pretty straight-forward. To use CataMoeda, a consumer simply deposits his or her change into a designated machine, which calculates the total amount input. The machine then emits a voucher for that amount and awards that individual an additional bonus. That voucher may be used at check-out at the retailer and at partnering entities.

For consumers, CataMoeda represents a way to get the biggest bang for their buck in terms of loose coins, with an additional monetary benefit to boot. For retailers, the service means increased spending from consumers, the generation of pre-sale cash, and access to new customers brought in by the machines.

Beyond in-store transactions, the service may also be utilized to make donations to non-profit organizations. It will soon be able to facilitate savings account deposits and pre-paid phone charges.

All this established, it is worth noting that CataMoeda is still in the rather early stages of development and has not yet undergone widespread implementation. The company, which was founded in 2012 by Bobillo alongside Victor Levy and Alberto Russi Jr., has achieved many milestones but still has a long way to go. “It has taken 18 months of development so far, and we have already applied for four patents,” Bobillo noted. “In the coming months, we might have a couple of more patents.”

The nature of the project – including the technology involved and the market penetration required for it to work – has rendered the runway for takeoff quite a bit longer than what it is for many tech startups today. The CataMoeda team has already set up R&D infrastructure, registered patents for its software, system, equipment, brand name and logo, and developed its first prototype.

Another factor helping CataMoeda to take its time developing the product and launching is investment. The startup has picked up four rounds of angel investment and has also received a seed investment from Fundo Santa Catarina (often referred to as Fundo SC), a Brazilian fund that is jointly managed by BZPlan and FIR Capital. Bobillo explained how the startup managed to get so much funding prior to launch:

We pulled together a thoughtful business plan and went out on the road, speaking with angel investors and seed capital investment. 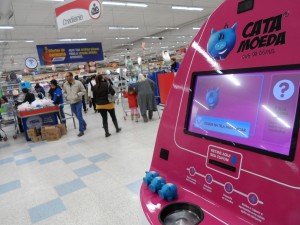 Of course, investment also means the clock is ticking on getting CataMoeda fully launched and installed in a widespread manner. “We are putting a lot of effort into reengineering the product to make it more robust and getting ready for manufacturing at large scale,” Bobillo remarked.

In the Paraná stores in which CataMoeda already has two machines functioning, the service has been quite a success: it has brought in over 210,000 coins and handled upwards of 5,000 operations.

CataMoeda certainly shows a lot of promise; however, the real test will come when it is fully launched. Bobillo concluded with an outline of his vision for the company over the next year:

We plan on doing a VC round, rolling out the manufacturing process in large scale, and spreading our vision and project throughout Brazil. We also will start the development of a new and smaller version of CataMoeda machine for smaller establishments.