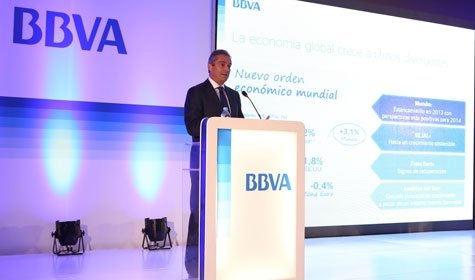 Angel Cano laid out BBVA's strategy for South America, indicating that it expects to invest US$2.5 billion in the continent over the next four years.

BBVA President and COO Angel Cano laid out the group’s strategy for South America, indicating that it expects to invest US$2.5 billion in the continent over the next four years (2013-2016).  “Our goal is to become the region’s top digital bank and the one most preferred by customers,” he remarked at BBVA’s Economic Symposium “Investing in South America” in Lima. The conclusion to be drawn from this: South America is a vital component of BBVA Group’s business.

South America a Key Piece of the Puzzle

Cano underlined various opportunities presented by emerging countries, predicting that they will contribute more than 60% of global growth over the next decade. He also pointed out that since 2007, South America has grown four times faster than more developed economies and is expected to double over the next couple of years. The Andes region – Chile, Colombia and Peru – are the most dynamic.  He explained:

This is because these countries together with Mexico have formed the Pacific Alliance and have started a process to integrate trade and finance, and facilitate the movement of people. This will certainly boost economic activity in the region.

South America represents 25% of the BBVA’s total revenues, rendering its investment and commitment part of a long-term approach. The group has already been present in the region for 20 years. In fact, BBVA’s international expansion began in Peru with the acquisition of Banco Continental in the 90s:

From that point onwards, we haven’t stopped growing, and now we are a reference player in the region’s financial system.

BBVA boasts a presence in Argentina, Chile, Colombia, Paraguay, Uruguay and Venezuela and has over 14 million clients – 30% of its total – representing remarkable growth. “In the last three years our balance sheets in the region have grown at more than 20% per year,” he affirmed.

Cano emphasized the technological nuance implicit in the investment:

Some 40% of this investment is earmarked for technology-related projects that will make BBVA the region’s leading digital bank. The remaining 60% will be spent on growth-related items that extend infrastructure and the distribution networks.

By 2016, the bank hopes to double its online client base to reach five million and increase mobile banking accesses eight times over. It’s worth remembering that most of South America’s banks – 84% – already offer mobile banking services, 74% having smartphone apps for clients.

BBVA’s strategy encompasses three main areas. The first has to do with management policies, aiming at a deeper understanding of today’s consumer. “We want to know their needs and the key to this is segmentation,” Cano explained.

Second, BBVA will expand its network of branches by 18% and install 30% more ATMs. “We will also encourage digital channels because they will play a fundamental role in banking in the coming years,” he affirmed. Third, the group will “continue the transformation process, speeding up processes and making them safer and more reliable by means of digitalization and automation.”

All these efforts are based on technology, which will continue to drive change.

Financing and banking are areas in which the internet is provoking radical changes by way of new business models, some of which are peer-dependent and that circumvent the financial circuit. Banks, including BBVA, are acutely aware of the situation and, in turn, are working to comprehend the financial needs of this new generation of online consumers.