Mexico has been quite the surprise for HotelTonight. The last minute hotel booking app has taken off faster in Mexico than in the U.S. and virtually any other market. Why? At today’s PulsoConf, HotelTonight Co-founder and COO Jared Simon offered up a potential explanation:

It’s a cultural norm here to wait until the last second.

Simon closed out the morning session of PulsoConf 2013 with a fireside chat, recounting the HotelTonight story and shedding light on how the startup has taken off so much, so fast. “We like to say that HotelTonight is bringing the fun back into booking hotels,” he quipped.

The road, like any, has been a bumpy one. While hotels stand to reap big benefits from the HotelTonight solution (imagine that they generally run at 60% occupancy levels), they aren’t exactly the biggest fans of distributors. Historically, in the online travel distribution space, hotels have been taken advantage of by distributors with a lot of power, meaning they’re not exactly eager to get onboard. HotelTonight set out to change that. “We wanted to be someone that hotels want to work with,” Simon remarked.

HotelTonight is designed in a way that helps hotels increase capacity without making sacrifices in revenues. It displays a very limited number of hotels in each city each day and rotates offers in and out, meaning that loyal customers won’t be tempted to rely on HotelTonight and make last-minute bookings to get discounts.

The company also took a unique approach in hiring. Instead of bringing in industry vets from companies like Expedia and Orbitz, who would be able to “hit the ground running,” HotelTonight hired individuals new to the industry and put them together in San Francisco for them to learn from one another. This has given HotelTonight a unique personality that is generally attractive to hotels.

Another roadblock when getting started: smartphones. Given the prevalence of the devices today, it’s easy to forget that in 2010, the story was quite different. The smartphone market was just taking off, and no one had done a mobile only commerce play. 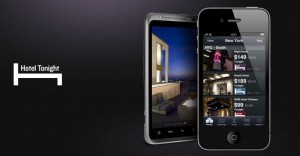 Three years later, the scenario has transformed, and HotelTonight has gained big time. The company announced a US$45 million Series D round just last week, has offices in San Francisco and London, and employs over 100 professionals. Not only are users booking hotels on the app, but they’re also using it as a time waster tool – quite to the surprise of HotelTonight itself.

The HotelTonight team has made a concerted effort to grow the company while remaining faithful to its original proposition of maintaining the company’s culture. Simon explained:

When we started, we wanted to hire the best people we could find, and we wanted them to look at their time at HotelTonight as the best time in their career. If we stayed true to that as a fundamental premise when building the company, it would take care of itself.

Simon brought up a few other ingredients in HotelTonight’s recipe for success.

On the financial end, he emphasized the importance of remaining focused on the goal and spending as wisely as possible. He also advised prudence in adding resources:

He also advised treading carefully when it comes to funding, telling the entrepreneurs in the audience to beware of bringing on investors who may prove subtractive to the business. He emphasized the importance of starting conversations prior to actively searching for funding as well.

Things are certainly going well for HotelTonight, but Simon is acutely aware of the amount of work that lies ahead and the pressure of staying at the forefront of its industry. “The thing that keeps me up at night is us losing our edge,” he confessed.

He and the HotelTonight team are now working on making the app faster (it currently takes about 10 seconds to book). They’re adding in elements of personalization, which is where there technology and investments are currently concentrated.

The company certainly has some lofty goals. Simon concluded:

I want this to be a company that everyone around the world uses, and that there’s nothing else they want to use to book hotels, ever.