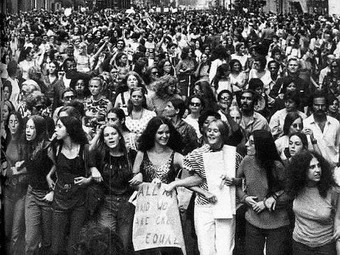 A lot has been said about gender issues in tech, and TechCrunch Disrupt certainly hasn’t been the exception. In fact, it’s been be a slap in the face.

A lot has been said about gender issues in tech, and TechCrunch Disrupt certainly hasn’t been the exception. In fact, it’s been be a slap in the face. And following a couple of presentations made on the #HackDisrupt stage yesterday afternoon, Disrupt has gone into full crisis-control mode.

Putting things into context, Disrupt San Francisco is one of the biggest tech events in the world, hosted by a top tech publication. The ticket this year ended up with a price point of US$2,995. Evidently, crowds willing to pay that kind of money come in expecting to be blown away by talent, and TechCrunch promises to deliver: this year’s roster of speakers includes big names like Marissa Mayer, Mark Zuckerberg and Ron Conway.

This latest edition of the event kicked off on a rather sour note.

During the Hackathon, the team behind an app called Titstare took the stage to present a product that invited men to take pictures of themselves while looking at women’s chests. According to the pair of Australians, it was all meant to be perceived as a joke.

I’m going pause here and invite readers to contextualize. What if the app was called Jewstare, Gaystare or Blackstare? No joke there. Objectifying women is a vile form of bigotry, and tech is a particularly sensitive environment in which to do so, since women are blatantly absent.

And again, this little stunt was pulled in front of an audience who paid (up to thousands of dollars) to be there…

The two exposed themselves as immature and attention deprived, while presenting a product with a deck that actually included a picture of a woman slapping a man, stating, “Staring at breasts is directly linked with a good, healthy heart… but women aren’t that warm to it.”

As disappointing as the entire situation was, it’s important to point out that it came to happen because the TechCrunch team actually invited these two guys to take the stage – and they let them finish their presentation.  TechCrunch even went as far as to tweet a link to Titstare from its account, eventually deleting and replacing it with this:

During the same event, another demo presentation actually included a guy pretending to jerk off. Regardless of the audience, this kind of behavior is not what one would expect from the best of the best in the tech scene. And again, it’s rather sexist. The TechCrunch team responded:

Two inappropriate presentations made it on stage at the hackathon earlier today. They misrepresented the hackers here and our team. We apologize and we’re making sure these problems don’t happen again.

A screening app would be greatly appreciated, this being a hackathon and all…

Normally our hackathons are a showcase for developers of all stripes to create and share something cool. But earlier today, the spirit of our event was marred by two misogynistic presentations.

Sexism is a major problem in the tech industry, and we’ve worked hard to counteract it in our coverage and in our own hiring.

Today’s issues resulted from a failure to properly screen our hackathons for inappropriate content ahead of time, and establish clear guidelines for these submissions.

Trust us, that changed as soon as we saw what happened at our show. Every presentation is getting a thorough screening from this hackathon onward. Any type of sexism or other discriminatory and/or derogatory speech will not be allowed.

All in all, TechCrunch has a lot of ground to make up for – at least where expectations are concerned. Good thing the event is just starting out.