For the founders Argentine startup Fligoo, whether to go global has never been a question.

For the founders Argentine startup Fligoo, whether to go global has never been a question. The gift suggestions platform has had its eye on attacking the international market from the start.

Accelerated by NXTP Labs and having launched just over two months ago, the Fligoo team has been quick on its feet in proving its concept and acquiring customers. It’s picked up over 5,000 registered users and has worked to get an initial foothold in Argentina in order to go after a much bigger market – the United States.

But let’s back up a bit.

The idea for Fligoo came about a year ago, when one of the company’s co-founders, Juan Cruz Garzón, was in need of gift ideas for his mother-in-law’s birthday. He went online to look for suggestions and found himself without a solution – so, he and a couple of lifelong friends, Lucas Olmedo,José Gonzalez Ruzo and Marcos Martinez, decided to build one. Garzón explained:

Starting with Facebook, the team built an algorithm that analyzes individual profiles to suggest the best gift ideas for each person.

Fligoo’s business model consists of affiliation with e-commerce sites as well as lead generation. In the States, the company has partnered with Amazon, Barnes & Noble and ThinkGeek, among others, from which it earns commissions.

Currently, Fligoo is working to pan out its customer acquisition strategy – first getting consumers to sign up to use the product and then getting them to buy more. It is also making a quite aggressive move in going directly to the United States.

This week, Fligoo CEO Lucas Olmedo plans to move to Silicon Valley in order to help the startup gain ground there. The company will participate in the LatAm Invades Silicon Valley Conference and then explore options there. “We want to end up in a landing program, that might be an accelerator or some other program that’s a bit more than an accelerator for the following stage,” Garzón explained. Fligoo has already reached out to Rocket Space and Sousalito Ventures to discuss the possibilities.

The Fligoo team also hopes that their status as NXTP alumni will help them make it in the United States. Garzón noted:

NXTP’s connections are the best in Latin America, at least in Argentina, because they have close relationships with all of the successful entrepreneurs who went to the States and developed their startups there. For example, Wences Casares.

On the subject of NXTP, Garzón also emphasized the advantages of launching their product during the acceleration process instead of before. The acceleration program starts out with a lot of workshops, training sessions and mentoring, introducing new concepts, ideas and metrics. Launching later in the process allowed the Fligoo team to adopt what they’d learned early on and avoid certain mistakes. 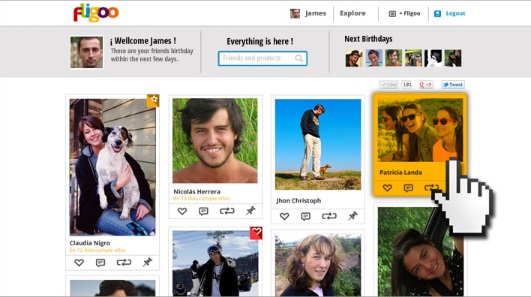 Though it’s only been up and running for a matter of months, Fligoo’s plans are highly ambitious. It plans to add more social networks, including LinkedIn, Foursquare and Twitter soon, not only to expand its business but also to mitigate the risks involved in building a product based entirely on one eternal platform – in this case, Facebook.

But is Fligoo being too aggressive? They don’t think so. Garzón elaborated:

We know we are ambitious, but we are going at a good speed. There are external factors that make us go as fast as we’re going. There’s no one doing exactly what we’re doing in suggesting gifts in the States at this moment. We know that, in two years, if we hadn’t done it, someone else would have done it. It’s the same with the product expansion – no one’s doing that.

In order to further accelerate their company’s growth, the Fligoo team is seeking investments – about US$300,000 over the next eight to 10 months. Half of that amount, Garzón said, has already been committed.