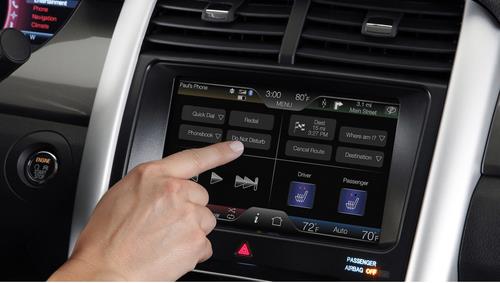 I had the opportunity to sit in a Tesla Model S last week (BTW, it is really shocking how many electric cars I see around in the Valley, I foresee a near future in which the gas station turns into a sketchy marginal place to hang out in).

My first impression of the dashboard (a 17” touch screen) was not a good one. Why would you want to touch a screen to turn the air conditioning on or off? Right after experiencing this, I started researching the topic and found that Ford has recently rolled back their plans to transform every car’s dashboard into a touchscreen, mainly due to negative consumer feedback.

I wonder whether this concept would apply to websites and smartphone app UI design or not. My initial thoughts are that users will always prefer simplicity and velocity over fancier and slower design when performing day-to-day tasks on a website or app.

This reminded me of a conversation I had with George Bell a year ago when he visited MIT. George was appointed CEO of Excite when it was just a five-person company. He scaled it to over 1,000 employees and raised more than US$100 million in venture capital, led the company’s IPO, oversaw the acquisition of more than 20 companies, and expanded Excite into a worldwide media property.

At its peak, he got a visit from two nerdy-looking guys from Stanford who were pitching the sale of their search engine algorithm for US$500,000. When George tested the search engine himself, he was shocked to see that it was 10 times faster than their current engine at Excite. Nevertheless, he rejected the buy. His rationale:

If we drive users so fast to what they are looking for, we won’t have them as long on our website, and hence we’ll lose the chance to interact with them for upselling.

Because those guys from Stanford couldn’t sell their algorithm, they decided to start Google, and the rest is history.

Another very well known example is Craigslist. True, there is a huge first mover advantage, but there is also a lot of merit in its uber-simple, straightforward and quick-loading design. Whatsapp is yet another example, albeit from this century. They managed to build one of the most successful messaging apps in the world, with over 300 million, users with an extremely simple (and boring?) design.

Any intelligent fool can make things bigger, more complex, and more violent. It takes a touch of genius – and a lot of courage – to move in the opposite direction.