We’re a pretty digitally dependent lot. But as more and more aspects of our lives shift into the virtual world, it’s nice to have some things in the real world, too. Such is the proposal of Likebook, a startup that allows people to turn their social media activities into books.

How does it work? Essentially, Likebook allows users to create a best of extract of their Facebook activities, including pictures, status updates and comments from friends. It is a tool for recording memories and telling stories that offers social media users a way to reconnect on a genuine level.

“Users already have several years of their personal life story on Facebook,” remarked Patrick Osinski, Associate at Likebook. “We provide a way to respond to the basic human need to gather, archive, and share the personal stories that are stored in social networks.”

Likebook’s backstory is a particularly endearing one – especially for romantics. The company, which originated as Egobook, was founded by Nicolas Cazagou in 2010. Cazagou wanted to give his wife a book retracing their love story on Facebook, and when he set out to find a service, he found out that no such thing existed. He outlined, “We wanted a book that would tell our story – the one we write every day, without knowing it – on our Facebook accounts.” Thus, what would eventually become Likebook was born.

Though Likebook originated in France, it has internationalized quickly. It is available in Spanish, French, English, German, Italian and Portuguese and has strong prospects in Brazil, where Osinski, a French expat, is based.

The company was one of two winners if the São Paulo leg of the Rio Info innovation contest 2012. And because Brazil is such a big market for Facebook – second in number of users in the world – it represents an enormous opportunity. 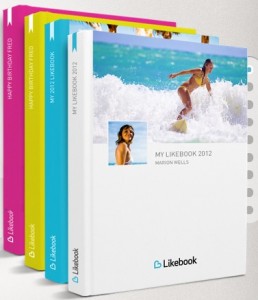 But the path to Brazil hasn’t been easy – and logistics, unsurprisingly, are much to blame. “The price of manufacturing our product is too high in Latin America and doesn’t offset shipping costs,” Osinski explained. “We tested several suppliers for manufacturing our products in Brazil, and we have not yet found the quality and prices that we have in other countries to bring the same product here.” Osinski also pointed to taxes as a major barrier for Likebook as well as the overall complexity of doing business in the country.