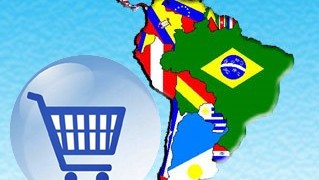 When it comes to what’s in store for e-commerce in Latin America, Brazil is just the tip of the iceberg. And while it may it have been the first out of the gate, it certainly won’t be the last, as the rest of the region is right on its heels.

As such, it should come as no surprise that Brazil isn’t the only Latin American country making waves in the realm of online retail. Chile, Argentina, Mexico, Colombia and Peru are right there with it among the top 50 most developed e-commerce markets in the world. This, according to Global Perspectives on Retail Online 2013, a Cushman & Wakefield report.

The report takes a broad look at online retail, considering issues like property, adaptation rates and new markets. It considers specific sectors, like travel, appliances and music as well.

Regionally, Latin America stands out in terms of sales. In fact, two Latin American countries are at the top of the report’s list of the fastest-growing markets for online retail sales. Mexico and Colombia are ranked fourth and fifth, increasing 43.2% and 41.9% in annual internet sales, respectively, over the past five years. Look a bit further down the list, and you’ll find Argentina ranked ninth (31.8%) and Ecuador eleventh (28.4%). As a region, Latin America ranks second in terms of five-year online retail sales growth, averaging 20%. It is behind only Asia Pacific, which experienced a 25% increase.

Globally, the U.K. boasts the most developed online market. The United States, however, is the global leader in online sales, representing about one-third of the worldwide total, with US$186.942 billion.

When it comes to potential, China stands to make the biggest impact in online retail. It’s the world’s biggest emerging online market and growing fast. Moreover, China ranks second in global sales, reaching US$75.322 billion in 2012.