iBillionaire is now available on the web. This announcement comes just a few months after the startup’s official launch with its iPhone app back in April.

Based in New York, iBillionaire helps everyday investors make smarter decisions by following the investments of the world’s top financial influencers and, as its name suggests, billionaires. It tracks the portfolios of big names like Warren Buffet, Carl Icahn, George Soros and Daniel Loeb, among others.

While the data gathered by iBillionaire has been available for about a decade, up to now, it’s been extremely difficult to access for anyone beyond investment professionals and financial firms. iBillionaire democratizes that information, making it available to anyone and everyone.

Why do billionaires matter, you ask? Because on the stock market, they do better. Here’s a look at Buffet’s strategy vs. the S&P 500: 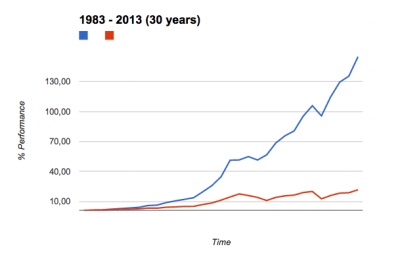 The billionaire’s data is finally available for everyone, in an easy to understand, and actionable format. The stock market is increasingly volatile, which often forces investors to decide when to buy, sell or hold a stock. Investors need a tool to help them make more strategically sound and profitable decisions within this volatility.

A Different Kind of Relevance in Latin America

iBillionaire is aimed at a global audience. However, for Latin Americans, it may have an especially high value.  “Unlike in the U.S., in Latin America, we don’t have a culture of saving and investing in stocks, there is very little trust in financial institutions,” Moreno explained. “Therefore, people often ‘save’ by buying multiple houses, cars, or putting cash below their mattress. In Ecuador, there is even a name for that – a Colchón Bank.”

With iBillionaire, the goal is to help people make smarter investment decisions, regardless of their nationality. “So, when someone in Latin American goes to our website and sees that Warren Buffett has 20% of all his money invested in Coca Cola and not in houses, or under his mattress, they can learn from that. They can see that investing in stocks, the right way, is also a good way to save,” he added.

Not only does iBillionaire give users from around the globe insights, but it also helps them to devise their own approaches. The startup is introducing an investment strategy creation tool that helps users build their portfolios. They mix the strategies of their favorite investors (50% one, 25% another, 25% another, for example), and then test this new strategy against their current portfolios or the S&P 500.

iBillionaire has also implemented another a new feature, Smart Notifications, which notifies users when billionaires buy and sell. It also lets them know when a stock they own is trading up or down more than the norm, keeping its investors up-to-speed on what’s happening in real time.

To get iBillionaire up and running, Moreno has tapped into his Latin American network for the company’s seed round, receiving backing from angel investors including Martin Varsavsky, Alec Oxenford, Fabrice Grinda, and NXTP Labs. The funds will be used to extend the company’s products across other platforms.

He’s also drawn on previous experiences with Kinetik and HIP in adjusting his approach to his latest venture, making changes in two main ways.

First, iBillionaire’s strategy has always been to be multi-platform from the very start. Moreno elaborated:

From day one, we wanted to create a tool that would be used on any platform, especially on open platforms like Android and the web. I’m a big believer that mobile is future, but I think it has some disadvantages as well, like waiting seven to 10 days to get an app approved and giving up 30% of your IAP. And, distribution with the top 25 charts is still a broken model.

iBillionaire has also been focused on making money from day one. “We have a clear business model,” Moreno noted. “You pay US$5/month or US$20/year for a premium subscription. We give away 70% of the features for free, but if you are a trader or financial advisor, you will likely want to pay a premium subscription and have additional features like real-time alerts and prices.”

Visit iBillionaire on the web here.