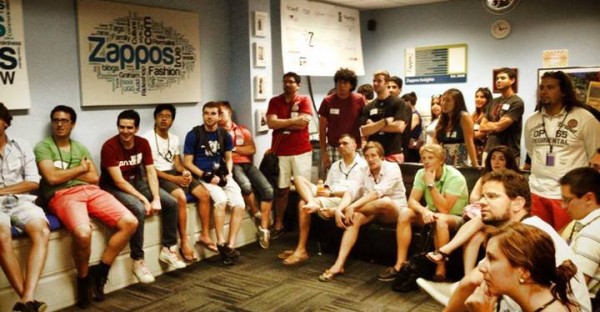 Desafio Intel, the competition that promotes tech entrepreneurship among university students and recent grads, is now in its fifth year. We reached out to Fernando Martínez, Education Manager at Intel, to learn more about the project and the motives behind Intel’s decision to take action in technology entrepreneurship.

What Intel is doing, Fernando explained, is placing its bets on educational development. “In the university setting, it’s important to create more and better opportunities for young people who are graduating,” he outlined. The objective is for these young entrepreneurs to bring about important benefits for themselves, for the Desafio Intel program, and, more importantly, for the countries in which they reside, employing themselves and creating well-paid jobs that contribute to the economy.

Over the years, Desafio Intel – the Latin American leg of the Intel Challenge – has evolved. Martínez noted, “The first year, 200 projects submitted. This year, we received more than a thousand applications.” He continued:

Technologies have changed. Now there are a lot of apps, one major trend on a global level, and also hardware proposals. Last year, we received projects in biotechnology and clean tech. This year, the competition focused on ICTs, and participation was quite active.

The age of participants has changed as well. When Desafio Intel began, most applicants were in their 30s. Now, most are between the ages of 23 and 25. As in the United States, Latin American entrepreneurs are becoming younger and younger.

The Value of Education for Entrepreneurs

Desafio Intel awards Latin American finalists a month-long stay in San Francisco, where they take part in YouNoodle Camp, an intensive program designed for tech entrepreneurs. “We believe that providing an educational experience can be much more enriching that writing a check,” Martínez commented. The initiative’s focus is on the long-term:

We’re giving entrepreneurs the best educational experience possible – something that they can apply immediately, turning them into agents of change in their own ecosystems.

In the camp, entrepreneurs learn, among other things, “the importance of establishing relationships and the exceptional collaboration among members of the Silicon Valley ecosystem.”

The entrepreneurs of the eight finalist startups received feedback on their projects in two main aspects: viability, from the Latin American market perspective, and presentation, how they pitch their products.

See an excerpt from Martinez’s interview with PulsoSocial’s Camila Carreño below:

Camila Carreño: How is the feedback received reflected in the entrepreneurs?

Fernando Martínez: I definitely think it’s reflected in their confidence when presenting their projects and in receiving validation from mentors, who tell them they’re on the right paths. In general, everyone comes out highly optimistic about what they’ve learned, their validation and the changes made to respond to the market.

CC: What element of Silicon Valley influences the entrepreneurs most?

FM: In Silicon Valley, there’s a lot of openness and an unwritten code that people can share their proposals with a certain degree of confidence, which helps them to connect with others. That catches the entrepreneurs’ attention. They’re surprised at how open people are, which is something that’s very specific to Silicon Valley and not often seen in other ecosystems.

CC: How do you think these Latin American startups will do in the global finals?

FM: Very well. We’ve got solid projects that can compete. The Chilean project was well received and has strong potential. And with the app for finding and sharing applications with friends, the entrepreneur is particularly charismatic, giving him a good chance of advancing in a setting like Silicon Valley. The Brazilian project has a good chance, too. I think we have a good group of winners.

Martínez also mentioned the two teams that received a special invitation to participate in the Intel Global Challenge 2013: Grability, an app that replicates the supermarket shopping experience, and KarmaShop, from the Cantú sisters, “a great example of how an idea can evolve in a  month.”

We’ll find out how the Latin American teams do at the Intel Global Challenge 2013 in October.