Mobile penetration is on the up-and-up all over the globe, in developing and mature markets alike. By the end of 2012, there were 6.8 billion mobile subscriptions worldwide. Moreover, consumers are becoming increasingly comfortable with the idea of using their mobile devices for finance-related tasks, with 64% of mobile media users utilizing their devices for mobile banking. The result: A mobile payment industry that is forecasted to account for up to one trillion dollars worldwide by 2015.

This and other data are revealed in a recently-released infographic created by M for Mobile, delving into the realm of mobile wallets.

NFC devices are on the rise. In Europe, 42% of mobile payments are expected to be made via NFC or contactless payments by 2015. And while the European market is, of course, more developed than that of Latin America, it’s likely that regional trends will be similar.

Consumers are also warming up to the mobile wallet concept, with 34% saying they would definitely use a mobile wallet to make payments and collect vouchers or use as an event ticket or for public transport. Among just smartphone users, that figure rises to 46%, the younger crowd being especially enthusiastic.

A major element contributing to the increased use of and comfort with mobile wallets is security and the perception of it when using mobile devices for transactions. More than half of consumers say they would use their mobile wallets if their security concerns were addressed – a big wakeup call for businesses in the sector.

Consumers point to a number of factors that would increase confidence, including pin numbers, spending caps and voice recognition. 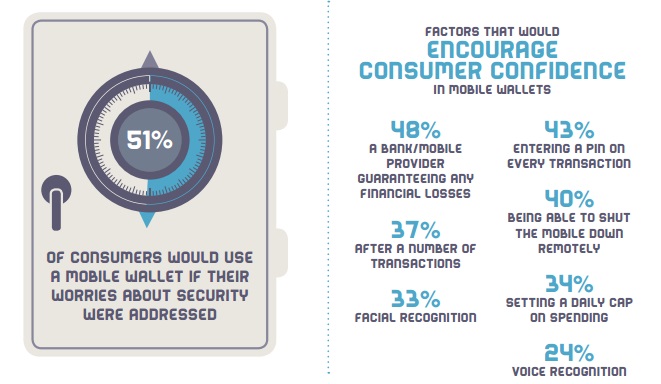 Retailers should pay special attention to consumer concerns, as they are the group that stands to benefit most from the mobile wallet revolution. Mobile payment spending in the retail sector is expected to rise 22% over the next two years, followed by transport at 20%, food and beverage at 17% and tech at 14%.

But if retailers want to fully reap the benefits of mobile payments, they’re going to have to make some adjustments. The majority of smartphone owners shop using their mobile devices, but a whopping 88% of those who do report experiencing negative issues. Working out the kinks in the mobile wallet system is essential for its complete success. 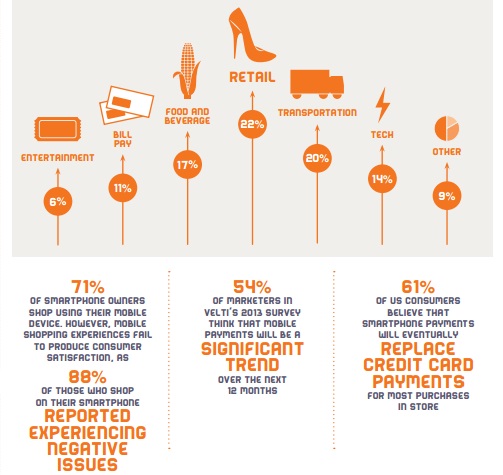