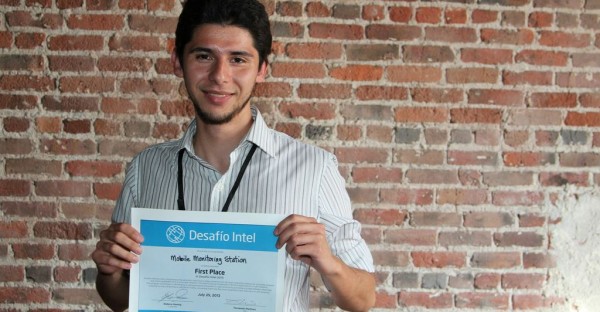 The winning teams of Desafio Intel Latin America 2013 hail from Chile, Venezuela and Brazil. They will now move on to represent the region at the Intel Global Challenge 2013, set to take place at UC Berkeley in October.

The Latin American leg of the contest promotes the development of technology entrepreneurs within the region’s university community. Of the over 1,000 projects submitted, in July, eight were selected to compete at a Demo Day event held last Thursday in San Francisco.

In the weeks leading up to Demo Day, the finalists took part in YouNoodle Camp. During the month-long program, the Desafio Intel entrepreneurs attended sessions led by Stanford professors, visited top technology companies and met with expert mentors and investors.

Javier Firpo, Director of Intel Education and CSR Programs for Intel Latin America, explained that the main objective of the competition is to stimulate technology development in young Latin Americans, turning them into business experts. He added:

For Intel, innovation is fundamental for the development of individuals, businesses and economies. In encouraging entrepreneurship among young people, we’re generating the conditions necessary to generate more employment and greater opportunities for economic development and competitiveness in the region.

All of the Desafio Intel entrepreneurs worked throughout the month of July to prepare for Demo Day. Fernando Martínez, Education Director at Intel, remarked:

During their Silicon Valley stay, the entrepreneurs worked hard to prepare their pitches and received feedback from mentors on both their projects and the way they present them. In general, that was reflected positively in their Demo Day presentations.

It always amazes me how much can change over just four short weeks. There have been pivots, partnerships, breakthroughs and breakdowns – but seeing it all come together on Demo Day reminds me again and again that talent has no citizenship and meritocracy ultimately rules.

At the end of the event, the winners were announced. Mobile Monitoring Station came in first place, with its platform based on wearable technologies. Its jackets measure various biomedical and environmental variables in industrial work settings, like mining. Information is gathered in the cloud, allowing safety supervisors to monitor the state of each worker and evaluate the effectiveness of the security measures taken. The service includes software, hardware and maintenance.

Having spent a month in the Silicon Valley entrepreneurial ecosystem has been awesome. I think that I now have a better vision of my own company and of technology. The fact that the ecosystem here is so much more mature compared to that which is just now emerging in Chile has given me a really valuable view.

Appetite+ took the second-place spot. The Venezuelan team formed by Benjamin Blank, Elias Nahum, Gabriel Delgado and Rafael Serrano created a social network to find applications, allowing users to see the iPhone apps their friends enjoy. Looking back at the Desafio Intel journey, Black remarked, “I had the opportunity to learn so many things, from how to talk to a venture capitalist, to how to create exact viral and marketing strategies for social media. This is an acceleration of knowledge.”

I started out making a lot of mistakes, but they helped me with each step, and now, I feel really prepared. I will arrive in Brazil renewed and ready to become a true entrepreneur forever.

Given the high level of talent in this year’s Desafio Intel Latin America, two more spots were added for regional entrepreneurs to attend the Intel Global Challenge. The first selected was Colombia’s Grability, created by Felipe Villamarin. And the second spot went to the Cantú sisters – Mely and Andrea – for their work with KarmaShop.