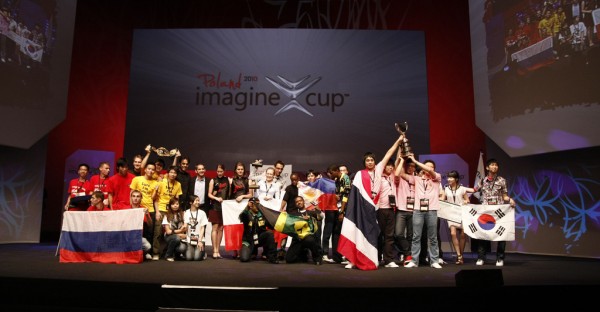 Microsoft’s 2013 Imagine Cup is currently underway in Saint Petersburg. And since Monday, 86 teams from around the world have been competing in the contest that seeks out innovative projects that solve everyday problems.

The Latin American teams, along with all of the 2013 Imagine Cup finalists, will learn the results of the competition later today. In the meantime, take a look at who’s competing.

Five projects are finalists in the World Citizenship Category:

➣ uSound, Argentina (Tweaks) – A technology focused on the prevention of potential hearing problems and on the integration of individuals that already have such problems. Using a smartphone’s processing capabilities and an audiometry test done by a doctor, it separates the sound in bands of frequencies, analyzes it, and calibrates the intensity of each band, adapting them to the user’s ideal level in each ear.

➣ InsuOnLine, Brazil (Oniria Games for Health Brazil) – A game designed as a tool for the education of medical doctors on insulin therapy for diabetes mellitus. InsuOnLine can be played on computers and mobile devices, and it reproduces the main scenarios of insulin therapy for diabetes in a primary care setting, along with game elements to increase players´ intrinsic motivation and learning.

➣ Zebras, Bolivia (Noodles) – A Windows Phone app for reporting traffic jams, parades, riots, and other things that are happening nearby and, in turn, alerting others. Zebra also helps users to find restaurants, coffee shops, hotels, book stores, etc., depending on how much money they’ve got in their wallets.

➣ AYNI, Ecuador (ANYI) –  A map-based social network designed to revolutionize volunteering. It increases the visibility of organizations and communities with specific unmet needs (food, shelter, medical attention, education). The goal of AYNI is to distinguish those in need and connect them with willing social actors.

➣Lazarillo, Venezuela (Lazarillo NET) – An integrated system that helps to guide the visually impaired. The system is controlled through voice messages, with the addition of advanced technology such as the use of GPS and geolocation through Bing maps and social networking.

Three teams are competing in the Innovation category:

➣ Callvenient, Brazil (Flying Ship) – An app that knows when a user can’t be interrupted and handles incoming calls made by phones or Skype. With a Microsoft account, Callvenient fetches appointment information and keeps track of one’s agenda, acting before a call. If the user’s busy, it will notify the caller and provide them with more convenient contact times.

➣ Karaoke Smart, Peru (M&Z Team) – A cloud-based karaoke song repository and streaming management system for the karaoke entertainment industry. KaraokeSmart is integrated to a family of apps for mobile devices  and smart TVs. It also connects a community of karaoke lovers from around the world.

In the Games category, Latin America has only one representative:

➣ Piggy Spanker, Puerto Rico (PsyTrack) – A video game that revolves around the story of Piggy the pig as he tries to rid his village of the evil chefs that want to cook him.