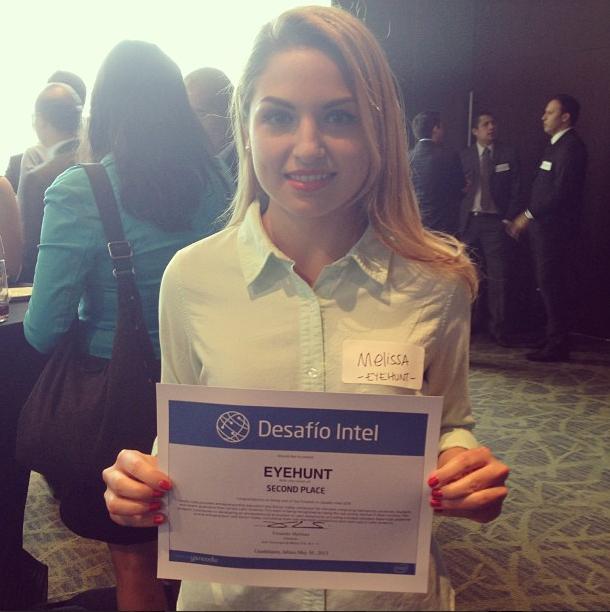 After coming in second place in the Mexican edition of Desafio Intel with their project EyeHunt, sisters Andrea and Mely Cantú faced a big challenge: finding the US$9,500 necessary to attend the competition’s YouNoodle Camp in Silicon Valley. With the support of a local mayor and their own crowdfunding initiative, the two managed to raise the funds needed.

This is the story of how they got to where they are today.

Mely, the younger of the Cantú sisters, came up with the concept for EyeHunt. A designer herself, she set out to solve a problem she deals with directly, creating a platform that connects outstanding creative talent (designers, architects, photographers, artists, etc.) with businesses looking to hire. EyeHunt simplifies the recruitment process for companies and helps creatives find jobs of real interest.

“You can accomplish everything you need to recruit on the platform and find the very best,” explained Andrea, the elder Cantú sister. To date, over 300 users have requested invitations for the Beta version of EyeHunt, an indication of the relevance of the service being offered.

Andrea quit her job as an Oracle designer to support her sister, Mely, in her startup endeavor. The two made the decision to apply to Desafio Intel, a competition for top technology-based projects in Latin America. The sisters’ goal was clear from the get-go – they wanted to earn a spot at the YouNoodle Camp in Silicon Valley, where they would be able to meet with business and technology experts and grow their business.

Thus, Andrea and Mely set out to prepare for their very first pitch. And though EyeHunt was initially conceived as a product aimed at the Mexican market, just 12 hours before the contest began, the decision was made to shift focus:

Mely took the lead in pitching the EyeHunt concept, focusing on telling a story and presenting the project in a visual way. Her presentation maintained the ad-hoc spirit of EyeHunt, where portfolio and experience carry the most weight. Job opening details are also essential to the formula, meaning quality algorithm-based matches.

The Desafio Intel jury commended the sisters for their passion. Mely recalled the experience, “It was my first time pitching. We were super excited, like we were on another planet.”

At the end of the contest, the judges delivered the news that EyeHunt had come in second. The reward? A scholarship for Mely to take part in the YouNoodle Camp. The Cantú sisters had done it … well, almost.

After their Desafio Intel victory, Andrea and Mely got in their car to return to their home city. On the way, they started brainstorming ways to come up with the US$9,500 needed for the both of them to attend the YouNoodle Came in the United States. Mely had a scholarship for the camp itself, but not for travel. And Andrea had to pay everything herself. It was the elder of the two sisters who came up with KarmaShop, the idea that would eventually get them through the YouNoodle door.

The Cantú sisters knew that many of their friends and acquaintances supported them in their adventure and decided to see how real that backing was. With KarmaShop, individuals had the opportunity to help them reach their Silicon Valley goals through donations. Their platform gave donors a wide range of options for support, from simply sending good vibes, to funding a five dollar cup of coffee, to putting in US$30 for a night of accommodations or giving US$150 for a day of camp tuition.

They found a developer, and within three days, the site was up and running. “Most of the money came from people we don’t know,” Andrea noted.

In fact, the Cantú sisters’ experience with KarmaShop was so positive that they want to open it up to others. They believe that one key factor is behind their second startup’s success:

Gamification is what people have liked most. Knowing that they’re doing something positive and getting good karma in return.

Support from an Unexpected Source

Andrea contacted the Mayor of San Pedro through Twitter, explaining that she and her sister had won Desafio Intel. He took note, and after a few exchanges via direct messages, the sisters landed a meeting. Mely repeated her three-minute pitch and, again, found success:

He called the treasurer and said, “I’m with two women with a really interesting project, they need 100,000 pesos, we’ve got to help them. How much can we give them?

He promised them 50,000 Mexican pesos, as long as they promised to share what they’d learned with local professionals. They accepted and, with that, got US$3,500 closer to their goal. “We reached the mark the last day. We picked up the checks, finished packing and headed to the airport,” Mely explained.

Now, the Cantú sisters are in San Francisco, taking full advantage of all of the opportunities Desafio Intel has afforded them. You can follow their adventures on Twitter (@accantu and @mely_cantu) and send them good vibes via KarmaShop.