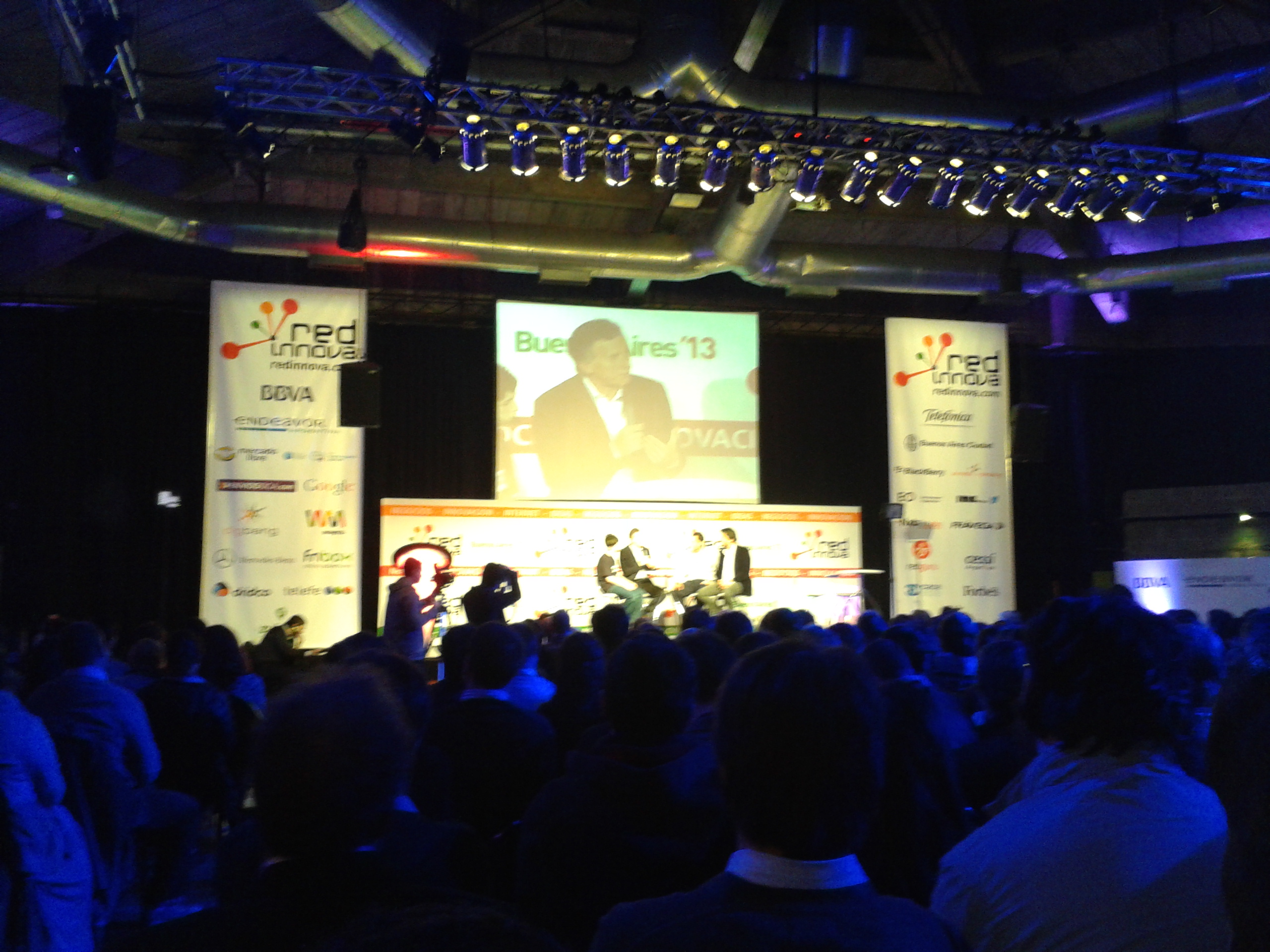 Following opening remarks from Red Innova Founder Pablo Larguia, Argentina’s entrepreneurial all-stars took the stage, one by one, to share their stories. A couple of local celebrities made an appearance as well.

Galperin, Bilinkis, and an *Official* Appearance

MercadoLibre’s Marcos Galperin was up first. The man at the head of what is arguably Latin America’s most successful startup to date, Galperin shared a bit of the background of his company, including the ups and downs and, of course, lessons learned.

Galperin was followed by Santiago Bilinkis, who was joined on stage by Mauricio Macri, the Head of Government of the City of Buenos Aires, as well as a 13-year-old Argentine developer to discuss the innovation and entrepreneurship in Latin America.

Marci pointed to government innovation as a way to ease the lives of citizens, whether by making government paperwork and processes available online, creating entrepreneurship-driving incubators, or partnering with related organizations. He highlighted his own initiatives, such as bike rental services, mobile applications, and programs that put technology in the hands of students.

Though the conversation generally steered clear of an overly-politicized discourse, Macri did get in a few jabs – especially in relation to Argentina’s growing debt problem as an obstacle to advancement and competition.

Bilinkis, who moderated the panel, shared some of his perspectives as well. He called Latin America a paradox in terms the high amount of entrepreneurial enthusiasm in the region, despite the many obstacles to building a successful business. He also pointed out the negative connotation often associated with the Spanish word empresario (in English, businessman or executive) among Argentina as opposed to emprendedor (entrepreneur) – something that makes business builders hesitant to evolve their titles once their business have grown.

Here are the highlights:

Get into a market that’s growing. This one came from Souviron, who utilized his experience with Despegar as an example. Even though the company made many mistakes starting out (Souviron referred to them as macanas), because it what it was offering was better than the other options out there – travel agencies, etc. – it made it anyway.

What matters most isn’t knowing everything, it’s being able to adapt to the circumstances. This one also came from Souviron, who proved quite humble in his take overall. He also told the audience that it’s not necessary to be a great innovator, either. Sometimes, it’s more important to look at what’s going on in other markets.

Pay attention to details. A good entrepreneur, in the Despegar founder’s eyes, is one who is constantly working out the kinks and improving, testing the product and watching competitors.

Don’t expect to win the lottery. Both Bilinkis and Freire are experienced not only in building their own companies but in helping others to start businesses as well, and overall, both proved very cautious in their expectation-related advice. Bilinkis warned entrepreneurs against “obsessing over becoming the next big thing,” and Freire echoed his advice, emphasizing that most entrepreneurs, ultimately, will fail.

Use your one and only bullet wisely. For investors, the startup game is different – they pick out 20 companies, and if just two are successful, they’ll be fine. The case isn’t the same for entrepreneurs, who place their bets on one single project. It’s something of which one can’t lose sight.

Bilinkis and Freire also took the opportunity to talk about their latest project – Quasar Ventures – a company builder that pairs solid business ideas and young entrepreneurs with star potential. What are they looking for in these Quasar entrepreneurs? Freire highlighted humility, hunger, passion, ambition and, of course, a desire to build a business.

The morning session came to a close with a special appearance by local celebrity, actor and television host Julián Weich, who co-authored 5%, a book on entrepreneurship and social change, with Freire. Coincidentally, the two will present the book this afternoon at El Ateneo in Buenos Aires.

The midday session of Red Innova Buenos Aires was the forum for the latest Wayra Demo Day. Find out more about the startups who presented here.

There’s still a lot more to come out of Red Innova today and tomorrow. You can catch the event streaming live on the conference website and follow the goings-on live via Twitter with hashtag #RedInnovaBA.