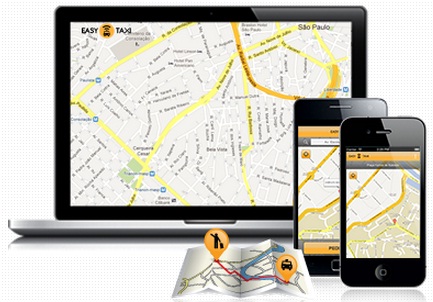 Easy Taxi was founded by Tallis Gomes two years ago. The app is designed to address a prevalent issue in world cities – traffic – in a straightforward way. Gomes outlined his vision for the startup in an interview with PulsoSocial last year:

Easy Taxi has a unique concept that entails a real utile service as a solution, connecting passengers with the nearest taxi driver. Time is the most valuable asset of the contemporary age, and traffic is the biggest cancer of big cities.

Easy Taxi is available for iOS, Android and new BlackBerry devices. It allows users to verify a pickup point and order a cab with the press of a button. Within seconds, the app sends users information on the confirmed vehicle, including car model, license plate and the driver’s name and photo. Users can follow the taxi’s location in real-time as it approaches, later saving favorite addresses, consulting ride history and utilizing other useful features. Because Easy Taxi drivers are vetted ahead of time, users can be sure that their rides are secure.

Easy Taxi has proven a favorite among investors, already having garnered a US$4.9 million Series A investment from Rocket. With this Series B funding, Rocket, by way of LIH, has upped its stakes in the company significantly.

Dennis Wang, Head of International Expansion of Easy Taxi, gave his take on the attractiveness of the company for both investors and users:

When we started the company in 2011, we had only one goal: To connect taxi drivers and passengers the smoothest, easiest and safest way possible. Less than one year later we can say: We made it! With more than 30,000 taxi drivers in our network and nearly 1,000,000 downloads and counting, we already gained a strong competitive edge in 30 cities across nine countries. With the recent round of funding, we want to reinforce our position as market leader and continue our global expansion.

The funds will be used to add new functions and features to Easy Taxi’s apps. It will also go towards developing new channels, enhancing customer service and continuing international expansion. The Easy Taxi team will focus on innovation moving forward as well. Gomes, who now acts as Easy Taxi’s CEO, explained:

Easy Taxi has pioneered, worldwide, one of the first and most innovative initiatives to combine education, culture and public transportation, called “Bibliotaxi,” through which passengers can borrow books that are available inside Easy Taxi cabs and return them in a next trip, like a mobile library. The program already runs in São Paulo and is being expanded to many more cities. We also take our social responsibility very seriously, and in addition to simply ambitioning to make traffic better in big cities, we are now a major player in the “Don’t Drink and Drive” campaigns across the markets we operate, having established partnerships with bars and restaurants to promote responsible drinking.

Easy Taxi isn’t the only cab-calling app out there, but it is certainly one of the most funded ones – especially regionally. This latest investment will allow the startup to further test out its clout and potential on all levels.