Bizzabo is on its way to Latin America. First stop: Brazil.

Out of Israel, Bizzabo is a mobile networking app for events and conferences. It helps professionals to discover new business opportunities and make the most out of their time while at the same time giving event organizers a distinct way to communicate with attendees.

Bizzabo’s arrives in Brazil hand-in-hand with local business builder Startup House. Its operations will be based in São Paulo and headed by Guilherme Junqueira, Founder of StartupMS and Business Developer at Startup House. Junqueira will lead Bizzabo’s efforts in Brazil and Latin America. He told Globo’s Revista Pequenas Empresas & Grandes Negócios:

A real problem exists in stimulating networking and communication in business events. With our application, event participants can identify and contact others who are present through their smartphones.

Brazilian event organizers stand to reap the most benefits from Bizzabo’s arrival. Not only can they use the app to publish event schedules and information, but they may also measure social media interaction, announce sponsors and communicate with attendees in real time. Junqueira explained:

The product increases organizers’ control over their events, rendering the process simpler and less expensive, since it reduces costs in being digital and provides tools to give organizers an idea of audience engagement and the number of business deals made possible through the event. 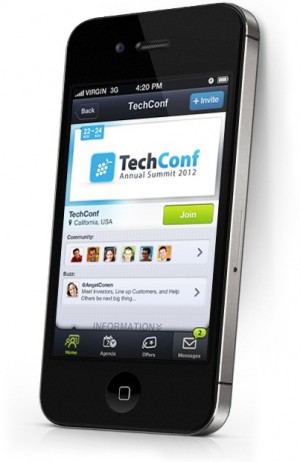 Bizzabo was founded in 2011 by Eran Ben, Alon Alroy and Boaz Katz. It boasts offices in both Tel Aviv and New York and is backed by US$1.5 million in seed funding.

Based on a freemium business model, the Bizzabo app has been used in approximately 2,000 events over the past year, increasing participation by an average 50%.

Brazil will serve as Bizzabo’s gateway into the rest of the Latin American market. The company hopes to have a presence at over 500 events in the region this year. Junqueira concluded:

We have high expectations, because we don’t see a competitor in the local or regional market.