Learn a language while giving back to the online community all over the globe. That’s the proposal of Duolingo, an online platform and mobile app that offers users a free and innovative way to learn new languages while at the same time unlocking online linguistic content through translation.

Launched in June 2012, Duolingo provides courses in Spanish, Portuguese, French, German, Italian and English. It is completely free of charge for learners, who actually contribute to its value through the power of crowdsourcing.

How? Someone in need of a webpage translation uploads their content to the Duolingo website. The content is presented to Duolingo students, who then translate it as part of their coursework. When the translation is complete, it is returned to the original content owner, who, in turn, pays for the work.

Duolingo is the brainchild of Dr. Luis von Ahn, co-inventor of CAPTCHA and reCAPTCHA (acquired by Google), and Severin Hacker. Dr. von Ahn explains the concept:

The way instruction on Duolingo works is that we give you fun exercises that teach certain words and concepts. You may have to say what’s in an image, or repeat what you heard, and we have a speech recognizer that tells you whether you said the phrase correctly. Now, in these exercises you are usually not translating useful or real-world content. These are just meant to teach you things. So, while you do eventually translate useful things in Duolingo, you are not doing it all the time, because we know you can’t fully learn a language by just translating.

The Duolingo system has proven highly effective for language learners. An independent study conducted last year examined the results obtained by English speakers learning Spanish with Duolingo. Participants were asked to take Spanish college placement exams at the beginning and end of the eight-week study to measure their progress.

Research revealed an average improvement in linguistic abilities of 91.4 points, around 8.1 points of improvement per hour of study with Duolingo. Those studying for travel got the most out of Duolingo, and beginners progressed more than students at advanced levels. The study estimated that it would take an average 34 hours for a person with no knowledge of Spanish to cover material from the first college semester of the language with Duolingo. 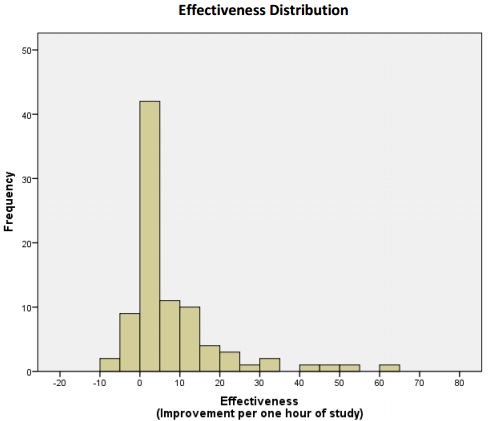 Duolingo has accumulated three million registered users over the past year, 100,000 of which are active.

The Duolingo iPhone app was released this past November, receiving one million downloads within 10 weeks. It is now is among the top five most-used education apps in the App Store. Now, Duolingo is launching its app for Android, available for download here.

Thus, Duolingo has been designed as a 100% inclusive tool, meaning absolutely no cost for learners:

The largest part of the market is not being addressed because there is no great way to make money from them. Most people who want to learn alanguage can’t really afford the best ways of doing it. What I wanted to do was to have a way to teach people a language for free. But not just free. I wanted to have the best quality of language education, and for free.

The way Duolingo keeps its products free, as mentioned, is through translations. And while the translation industry, which is extremely quality-centric, may be skeptical the value of the results produced, the Duolingo team has found that the translations provided by Duolingo students are generally as accurate as those performed by professionals – save poetry and law.

Innovative is a term thrown around a lot in the tech industry, but with Duolingo, it truly applies. The team has managed to combine seemingly unrelated elements to create an entirely accessible solution, harnessing the products of education and motivation to create a model that is unique, profitable and relevant.