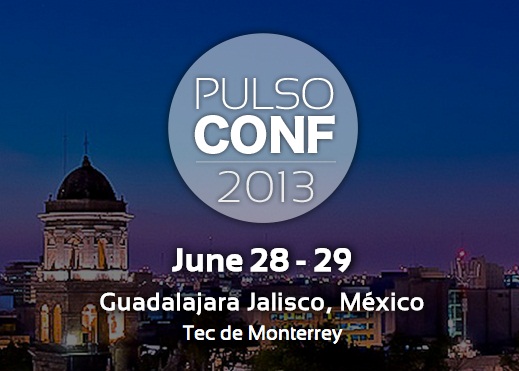 Latin America’s tech industry grows year after year, but it’s still got a long way to go in fully consolidating and reaching the Silicon Valley level. That’s why, with PulsoConf, we’ll bring together top players from the Latin American and U.S. startup scenes to explore business opportunities and strengthen the region’s ecosystem.

The outlook is promising. There are several investment funds focused on the region in existence right now, such as Kaszek Ventures, from the founders of MercadoLibre, Brazil-focused Monashees, and 500 Startups, which last year acquired Mexican.VC. And one can’t overlook Start-Up Chile. The government-sponsored program has attracted talent from all over the world, positioning the region as a center of entrepreneurship and generating replicas like Start-Up Brasil and Start-Up Peru.

In response to the evolution of Latin America’s tech ecosystem, PulsoSocial decided to organize the first ever PulsoConf last year. The 2012 event took place in Bogotá and featured presentations from Adam D’Augelli, David Weekly and Alex Torrenegra, among others. More than 600 people attended.

Given the success of last year’s event, PulsoConf is back for round two. This time around, it will be held in Guadalajara, a city that is on the brink of developing one of the most solid tech ecosystems in the region. Moreover, it forms part of one of the most attractive markets on the map – Mexico – which is valued not only for its geographical proximity to Silicon Valley but also for its size.

Andrés Barreto, Founder of PulsoSocial, described his vision for the event:

PulsoConf is taking place in Guadalajara this year because, as was the case with Colombia last year, all of the ecosystem’s players have united to support the event and gather together top international entrepreneurs, investors and developers under one roof.

For Latin American entrepreneurs, it is essential to know who leads the tech industry not only in the region but in Silicon Valley, the global center of entrepreneurship and innovation, as well. This in mind, PulsoConf is in the midst of preparing a conference agenda with top international tech professionals and thought leaders:

Luis Samra – Evernote. Samra is the Regional Manager of Evernote Latin America. A serial entrepreneur, he has experience in the payment sector and in mobile startups focused on Latin America and the Latino market in the United States. Samra founded Avajo LLC, Wireless Latin Entertainment and Tiaxa.

Jared Simon – HotelTonight. Simon is one of the founders of HotelTonight, a last-minute hotel booking app. He currently acts as the company’s COO. With an extensive background in building internet-based companies, Simon previously formed part of the TurnHere development team.

Brian Wong – Kiip. Wong is the Founder and CEO of Kiip, which received an investment of over US$4 million from True Ventures when he was just 19. He is an expert in social media marketing and presented at PulsoConf 2012.

Ariel Arrieta – NXTP Labs. Arrieta, an Argentine serial entrepreneur who has been active in the internet industry since 1994, is one of the co-founders and directors NXTP Labs. His online advertising companies have been acquired by FOX, and he frequently speaks at tech events, including IAB, Online Marketing Europe and Marketing 2.0. Arrieta seeks out the early-stage startups for investment through NXTP Labs and is also an angel investor himself.

Andrés Barreto – Socialatom, Onswipe, Grooveshark, PulsoSocial. Barreto is a Colombian serial entrepreneur and the Founder of PulsoSocial. He also co-founded online music service Grooveshark and tablet publishing company Onswipe, which has garnered over US$5 million in investments to transform the content-consuming experience for mobile devices.

Oscar Salazar – Citivox, Uber. Salazar is the Founder and CEO of Citivox, a forum for the mobile world designed to bring communities closer together. He is also an advisor at Uber and is interested in technology and government transparency.

So now you know. PulsoConf is an event that simply can’t be missed.

It will take place on the 28th and 29th of June at the Guadalajara Campus of Tecnológico de Monterrey.

Last year, early bird tickets for PulsoConf sold out within an hour. To make sure you reserve your spot at the conference, register to attend the event now and receive a US$25 discount on your ticket. And make sure to stay up-to-speed on all event updates by following PulsoConf  on Twitter.

See you in Guadalajara!

Facebook, Twitter and LinkedIn: Where Does LatAm Stand with Social Media’s Big Three?
Chile: PayPal and Multicaja Team Up in Chile to Facilitate Bank Account Payments