The Social Radio just got a bit more inclusive. Today, it is launching its new iOS app, which now features support for the visually impaired.

“Suddenly, we realized that a lot of visually impaired users were downloading the app, but the app wasn’t designed for them. We started to get a lot of feedback from visually impaired users, saying that the app was great to follow Twitter, but on the other hand that there were certain features the app should have to be even more useful,” explained Roberto Gluck, CEO of The Social Radio. 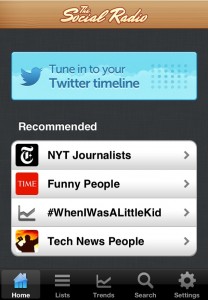 The Social Radio team consulted users as to what adjustments were needed to render its iOS application appropriate for the visually impaired. The app now provides full voiceover support and allows for speaking rate adjustments – two essential updates.

The Social Radio converts social streams into audio, allowing users to listen to their Twitter timelines mixed in with their favorite music. Founded in 2011, the company was accelerated by both NXTP Labs and Start-Up Chile. The Social Radio app has received over 50,000 downloads in 20 countries around the world and supports English, Spanish, Russian, German, Portuguese, Italian and French.

For the time being, support for the visually impaired will only be available on The Social Radio’s iOS app. It will soon be available for other platforms, including Android and its web application, which launched last year.