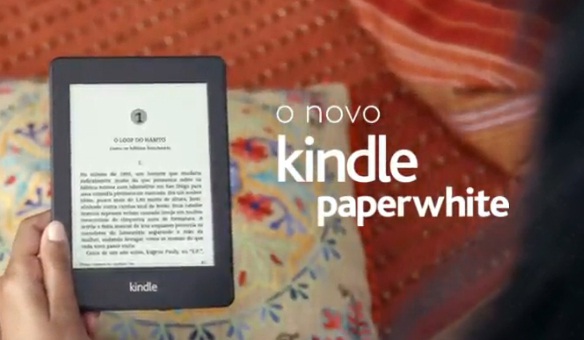 When Amazon launched in Brazil in December, it became clear that the arrival of the Kindle was only a matter of time. It launched its basic e-reader soon after, and now, a more advanced device has hit the market. Amazon has now started to sell its Kindle Paperwhite e-reader in Brazil.

According to Amazon’s Brazilian website, the Paperwhite is priced at roughly US$240 (R$479) –about US$100 more than the basic Kindle device. Amazon’s Brazilian catalog now includes 1.6 million books, including 16,000 Portuguese-language titles and 2,500 free books.

With this launch, Amazon hopes to further penetrate the Brazilian market and compete against e-reader and tablet makers from within Brazil and abroad. Brazil is the world’s 10th largest tablet market, with 2.9 million units sold in 2012 – a fact not lost on Amazon.

“Brazil is an extremely important market,” Amazon representative Alex Szapiro told AFP. “There is an expanding middle class and we see a great opportunity for growth.”

That said, Brazil’s digital books market hasn’t exactly thrived in the past. Brazilians have been hesitant to pay for e-books, many never having done so at all. Amazon’s arrival, in fact, has played a central role in really getting the ball rolling in sparking competition and inspiring others to get into the e-book game.

By the end of 2013, the e-book market should reach a 2.6% market share. Amazon, with the Kindle e-reader devices, is poised to grab a substantial piece of the pie. “It is important that Brazilians see this new device as an iconic e-reader,” Szapiro said.

It’s not likely that Amazon will stop its regional rollout with the Paperwhite launch. When asked whether the company plans to expand its Brazilian product line or has similar product launches elsewhere in Latin America up its sleeve, Szapiro replied, “We are just at the beginning, there is much that could occur.”

Looks like Amazon’s Latin American story is to be continued …