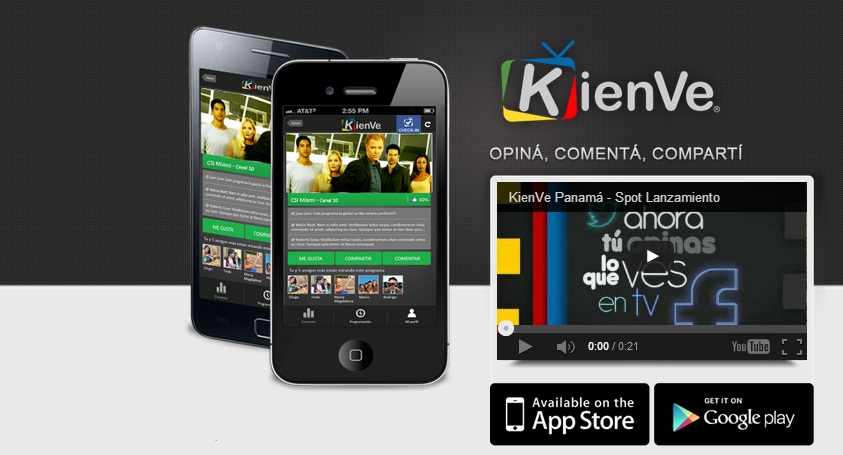 KienVe, the Uruguay-based mobile application that serves as a real-time social network for the second screen, was named the winner of this year’s #PS10. And on March 27th, the team will travel to New York to be honored for and celebrate its achievements.

“We really are very happy and excited. This is important recognition of the work we’ve been doing and confirmation that we are on the right path, even though much more remains to be done,” remarked KienVe creators Gabriel Roizner (CEO), Federico Zubia (CTO) and Maximiliano Schatz (CFO and CCO).

As in many cases, the story of KienVe began with a passion shared by startup’s founders – the media and, specifically, the television.

With KienVe (formerly known as ComparTeVe), the team set out to revolutionize the way television is viewed by way of the growing niche that is social television. A market in which Argentina’s Comenta.TV and Chile’s SocialMeter are also active, social TV responds to a Latin American reality: more and more Latin Americans are acquiring smartphones and using social networks on that second screen.

With its own audio-recognizing algorithm, the KienVe application confirms what programs, channels and commercials viewers are watching. It invites users to “check in” to report their viewing activities, thus creating micro social networks of viewers.

This is where opportunities for business begin. Advertisers, networks and media outlets are provided first-hand information about viewer behavior and opinion, and they also get insights into what their audiences are doing while they watch TV. Users are able to comment on what they’re watching and also share on Facebook and Twitter.

Thus, KienVe becomes a different option for advertisers and networks accustomed to traditional ratings systems. With the KienVe app, they receive information that is highly segmented and generated in real time. “As opposed to Ibope, which uses its own hardware to measure ratings with a small sample, our solution utilizes smartphones as hardware. This gives us access to a much larger sample, rendering our results more precise and farther reaching – not to mention for a much lower price,” explained Roizner.

The reports generated foster greater understanding and analyses surrounding viewer behavior. They also help networks, advertisers and KienVe itself to design an offer that is best fit for each user (videos, trivia, polls, etc.). “The ability to create interactive commercials is our principal competitive advantage,” said Roizner. “Today, advertisement is one-directional. When networks and advertisers start using our technology, they can make two-directional commercials. Users who have the KienVe application open recognize the advertisement they’re seeing and interact, whether filling out a form or receiving a coupon, etc. Thus, we are able to generate engagement. Moreover, it is possible to measure the performance of every advertisement and ROI.”

Users benefit at the same time. “We invite viewers to respond to questionnaires without any additional costs and earn rewards by interacting with programs, networks or commercials from different brands,” Roizner noted.

When it comes to the reception of the KienVe app, it looks as though things are going quite well. The startup was chosen to join the fourth generation of Start-Up Chile companies, and it was named Hot Company of the Year at the Festival of Media LatAm in Miami last year.

In February, KienVe announced that it would be attacking two new markets: Chile (where it has opened an office) and Panama (where it has commercial representation). In both cases, promotions and agreements with local networks and advertisers are essential to its success.

“We officially launched in Chile on February 18th with a spot on ChileVision. We achieved 50,000 downloads, and that number is growing each day. We have signed commercial agreements with ChileVision, Entel and Sony, and we’re negotiating with other networks as well,” said Roizner.

With the opening of an office in Miami, the KienVe team is analyzing what’s next. Schatz remarked, “We are organizing our Series A round of funding for 2013 and also analyzing entering the market in Mexico – where we’re in the pre-sales phase – as well as Colombia, Peru and Argentina.”

Thanks to American Airlines, PulsoSocial will fly the members of the KienVe team to New York to attend the PS10 Awards Ceremony on March 27th. The event has been organized in conjunction with the Berkley Center for Entrepreneurship and Innovation of the NYU Stern School of Business.

The PS10 event will feature a discussion panel on investment in Latin America as well as pitches from Latin American companies, including KienVe. See the full event agenda here.

You can also get to know more about KienVe and the other startups of this year’s PS10 here.