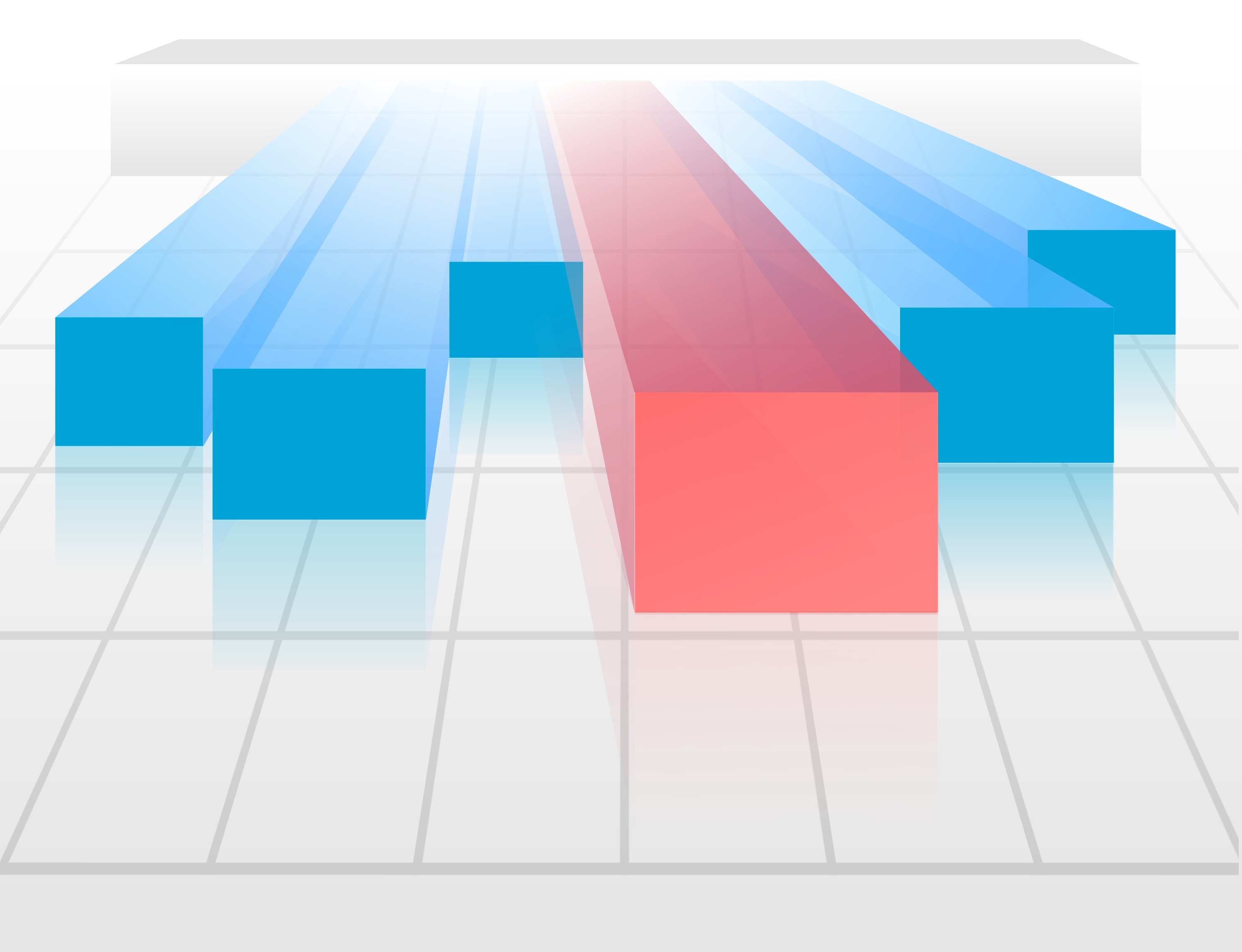 Fnbox has released the results of its latest investigation of Latin America’s internet industry. Entitled 2013 Latin America Internet Market Research & Outlook, the study takes a look at the current state of affairs in Latin American internet and provides insights as to what’s on the horizon. 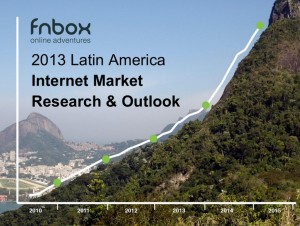 On a global level, Latin America is a rising economic power, and Latinos are a growing political force as well (à la 2012 presidential elections and subsequent GOP semi-identity crisis in the United States). Latin American consumers have a per capita disposable income that is 2.5 times that of China and 4.5 times that of India, and foreign direct investment and commodity prices in the region are hitting record levels.

Such statistics aren’t going unnoticed, and optimism about Latin America’s prospects is abound. According to the Fnbox study, Latin America is cited by 55% of VCs as an area of increasing U.S. investment in 2013. Unemployment rates are down, as are interest rates, and all in all, the situation is looking pretty stable.

In fact, four of the top 10 countries most optimistic about business in 2013 are in Latin America – Peru (1), Chile (3), Brazil (6) and Mexico (8) – and the region as a whole is growing at a faster rate than more developed economies.

Nevertheless, with growth come inevitable growing pains and a potential plethora of obstacles ahead. But instead of lamenting these impediments, Fnbox celebrates them as opportunities for innovation.

What are these roadblocks? The study points out a few:

Scaling. Scaling a business in Latin America is hard for players big and small. For example, in the United States, it takes an average of six days to open a firm. Want to know how many days it takes in Brazil? 119. What’s more, Latin America is often more expensive – credit card processing fees are high (4.99% in Argentina as opposed to 2.9% in the U.S.), as are labor taxes (41% in both Argentina and Mexico and a whopping 70% in Brazil).

A region divided. There are big differences between each country in Latin America, making doing business regionally a tall order. The Fnbox report takes a look at Brazil vs. Chile. Brazil is ranked significantly lower than Chile in terms of the ease of doing business in the country (126 vs. 39), corruption perception (69 vs. 21), and global competitiveness (58 vs. 30).

Brazil a mixed bag. At the current moment, Brazil is the undisputed star of the region as a whole. It leads the way in e-commerce (70% of business in the region) and credit cards (73%) and also boasts a big chunk of Latin America’s GDP (43%) and internet population (36%). Yes, Brazil is hot, hot, hot – so hot, in fact, that currency appreciation is becoming a problem.

Despite more than a few uphill battles ahead, Latin America is one of the most promising emerging markets in the online realm. It is the home of 600 million mobile phones, 236 million internet users, 188 million Facebookers and 63 million e-commerce buyers. Its internet population has doubled over the last five years, yet saturation remains a long way off.

Here are some stats: 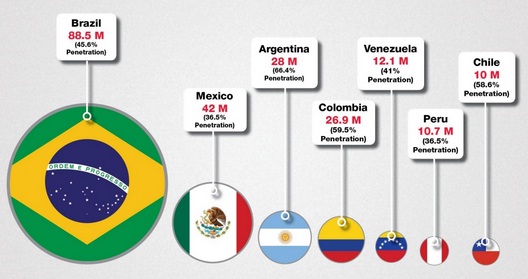 Mobile Market: The number of mobile phones in Latin America surpassed the number of people in the region in 2011. About 80% of all devices are of the prepaid variety.

E-Commerce: The region’s e-commerce industry is expected to grow 11 times over in the 10-year period from 2005 to 2015. Mobile e-commerce (m-commerce) still has a long road ahead: just 3% of e-commerce transactions in 2012 took place over mobile devices.

Credit Cards: Penetration is still a problem. Brazil leads the way with seven credit cards for every 10 people but still lags behind Spain (10 per 10) and the United States (19 per 10).

User Profile: Internet users in Argentina, Colombia, Mexico and Brazil spend more time online than the global average, and the audience in the region is generally younger than the worldwide norm as well. And, unsurprisingly, Fnbox’s research found that Latin Americans are still obsessed with all things social – five of the most engaged countries in the world for social networking are in Latin America (Argentina, Chile, Peru, Colombia and Mexico).

LatAm’s Prospects: Not Half Bad

The community of entrepreneurs, developers, investors, internet users and professionals in Latin America is growing at an unprecedented rate.

We’re witnessing a boom in accelerators and incubators in the region, from Start-Up Chile to 21212, NXTP Labs and beyond. Capital is more accessible now than ever, with US$7.9 billion in private equity and VC investments having been committed to the region in 2012. This year, investments will continue to roll in, including capital from cross-border entities like 500 Startups and Redpoint e.ventures.

Can Latin America’s tech ecosystem rival that of the United States or Europe? Not quite yet. But is it well on its way? Definitely.

Take a look at the full Fnbox report here.

Apple & IGB to Try to Cut a Deal on iPhone Trademark Dispute in Brazil
News Breaker Turns News Maker: Startupi Lands Investment of its Own