The Mobile Premier Awards 2013 took place in Barcelona yesterday evening, where 20 applications – including seven from Latin America – competed for three spots on the podium.

The competing applications were the best of the best of AppCircus contests held around the world last year. Yesterday evening, each team pitched their products to a panel of judges, the Mobile Premier Awards audience and the AppCircus team in hopes of taking home a prize. At the end of the night, three winners were announced.

Here’s how the competition shook out. And did we mention two of the three top spots went to Latin American applications? 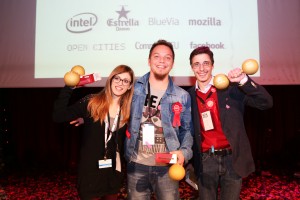 Atooma makes your smartphone smarter. Users set up conditional events to trigger specific actions, thus automating their devices – for example, one can have e-mails or text messages read out loud while driving, or turn off certain features when the phone’s battery is about to die. Atooma is currently available for Android only.

The winner of AppCircus São Paulo’s special Microsoft edition, Denare is a finance management application. The app employs gamification-like features to help users reach their financial goals. Notably, it “gets smarter” with increased use over time.

Grabbity is a game application for iOS. Players accompany one brave “grabbian” through 80 levels, various enemies and numerous puzzles as he fights to save his world. The winner of AppCircus Bogotá, Grabbity received nearly half a million downloads within just two months of its August 2012 launch.

The winning applications weren’t the only announcements made at the Mobile Premier Awards last night. During the event, AppCircus also announced a new initiative: Hack at Home.

Hack at Home is a unique global platform that gives developers and entrepreneurs the support and tools they need to turn great ideas into great apps. Moreover, it connects them with businesses and institutions seeking solutions to specific problems. Through the initiative, AppCircus aims to spur the creation of new applications and strengthen the global community.

To find out more about Hack at Home, see the video below: