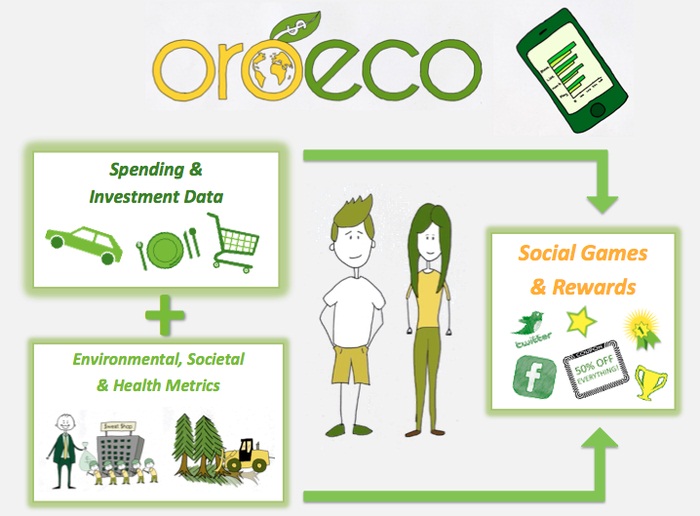 In today’s globalized economy, the environmental footprint of each and every one of us reaches far beyond our local communities, countries and even continents. Every dollar, peso, euro, real, etc. that we spent has an impact, even though, much of the time, we can’t see it. And in a world in which climate change is becoming an increasingly urgent problem, the out of sight, out of mind mantra just won’t work.

Based in the U.S., Oroeco is the world’s first online platform that automatically tracks the environmental impact of everyday purchases, investments and lifestyle decisions. The tool automatically collects credit card purchase data (via Mint.com) and connects it with scientific climate impact data to inform consumers about the footprints they leave behind with each product or service they buy.

Thus, consumers are able to track their impacts and make adjustments where desired. What’s more, Oroeco integrates gamification features that encourage users to compete with friends, family and others and rewards them for their efforts.

Oroeco is headed by Ian Monroe and backed by a team of top minds from some of America’s best universities. Despite the startup’s strong roots in the United States and close to Stanford University and Silicon Valley, it is currently accelerating in Latin America with Start-Up Chile.

While more developed markets, such as the United States and Europe, remain Oroeco’s primary target, Latin America does have potential for the startup should the right cards fall into place – especially considering what’s at stake.

Due to its geographic location and prevailing reliance on natural resources, Latin America is considered particularly vulnerable to impact from climate change – even though it accounts for less than 15% of global greenhouse gas emissions.

It is estimated that damage from climate change could cost Latin America and the Caribbean up to US$100 billion per year by 2050. The region would likely lose between US$30 billion and US$52 billion in 2050 in the agricultural exports industry alone. And while 2050 may seem a long way off, some of the effects of climate change are already being observed in the region.

We reached out to Monroe to learn more about Oroeco, sustainability, and Latin America’s standing as a potential point of interest for the startup.

Emily Stewart: Climate change and sustainability are obviously issues you are passionate about and have worked on for quite some time. At what point did you decide to go at the issues via technology, and what was the process behind that decision?

Ian Monroe: It was definitely more of a process than an “ah ha” epiphany moment. I’ve been working around the globe on projects linked to climate and sustainability for most of the past decade. From Brazil and Chile to Tanzania and Uganda, the more countries I worked in the more I came to appreciate how globalized our economic supply chains have become.

I also noticed how sustainability information isn’t making its way from farms and factories to consumers on the other side of the globe, meaning that the majority of our personal pollution now gets outsourced overseas without us seeing the impacts. I’ve worked on many projects that have encouraged sustainability in specific segments of the economy, like forestry and biofuels, and I still think these projects are vital. But these efforts increasingly felt like they were running into a fundamental flaw in our economic system though: our economy doesn’t account for social and environmental externalities, so decision-making is generally just based on price and marketing hype. I think most of us now care about sustainability, and most companies want to green their supply chains, but we as consumers can’t wield our wallets to drive real change without science-based, quantitative information about the full “life cycle” sustainability of the products and services we buy. Ideally this information should also be fun, easy and rewarding to engage with, otherwise it can get overwhelming quite quickly. 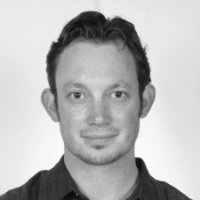 This is the core ethos behind Oroeco, which started coming together while I was working on an apparel industry sustainability project in China. For the first time I saw the full magnitude of our outsourced pollution, and started wondering if there was any way to harness information technology to dramatically realign our economy for sustainability. I also realized there is already great sustainability data already out there; it’s just a matter of transferring information from academics and industry consultants to the rest of us, then making it fun and engaging. Seeing this was enough to make me want to take a break from Stanford to start building a team and refine the idea into a startup.

ES: With Oroeco, you are looking to appeal to various emotions and responses in users, not only the sense of social responsibility but also a desire for rewards and savings. How do these elements play off of one another? What do you think will have the most impact?

IM: Honestly we’re still figuring it out. We expect that different combinations of elements will motivate different users, and we’re talking with psychologists at Stanford and UC Berkeley to help us build gaming mechanics that motivate real change. For some, social collaboration and competition will be motivational, while we have other users who’ve expressed a desire to just set goals for themselves and earn rewards based on personal fulfillment (rather than social encouragement). So we’re trying to create a platform that’s flexible to fit individual user preferences. Obviously we can’t be everything to everyone, but I do think platform flexibility will be key to both our ability to scale and our overall social and environmental impacts.

ES: You’re currently working with Start-Up Chile. What has your experience in the program there been? Why choose to accelerate in Latin America?

IM: The Start-Up Chile program has been fantastic. It’s an amazing opportunity to connect with brilliant startup minds from around the world, as well as a great environment to grow Oroeco. Also, at more than $40,000 with zero equity, the program was definitely the best deal we could find. I was encouraged to apply by the founders of Babelverse, who I met through a mutual friend last summer in San Francisco. They raved about both the international network and the equity-free funding. I didn’t need much convincing, as I’ve enjoyed working elsewhere in Latin American and I’d heard great things about Chile. Thus far everything has lived up to (or exceeded!) expectations.

ES: Climate change and sustainability are pretty hot topics in the U.S., especially in the wake of Hurricane Sandy. What have your impressions been of how the issue is dealt with and discussed in Latin America?

IM: Hurricane Sandy certainly helped reignite American climate dialogue. Unfortunately though, despite overwhelming evidence that climate change is real, manmade, and potentially quite disastrous, climate remains a controversial and divisive issue in the U.S. It really should just be an issue about science, but big money interests have succeeded in obscuring the scientific consensus and placing our climate future in the hands of partisan politics, which is never a productive path. 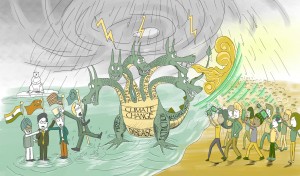 As a whole, I think Latinos are much more aware of climate change than most Americans, which polls show is true both in the U.S. and Latin America. I think it’s partially because Latinos tend to have stronger agrarian roots, so they’re more attuned to what’s happening on the land, and they’ve seen substantial climate changes over the past few decades. The strong social justice currents that run through Latin America may also help inspire Latinos to take climate action. Lastly, there seems to be less of an antagonistic relationship between religion and science in Latin America, which has played a large role in the U.S. climate “debate.”

Enhanced awareness about climate change in Latin America hasn’t necessarily translated to increased climate action though. There’s tremendous solar energy potential in the region, but fossil fuels and large dams still dominate the energy landscape in most countries. Agriculture and livestock are also substantial contributors to change in the region, fueled by high (and growing) red meat consumption. The current average American lifestyle is clearly unsustainable, but many Latinos are still striving for it. It remains to be seen if Latinos will take personal sustainability seriously as their incomes rise, or if they’ll just follow U.S. trends by buying bigger houses and bigger cars, and eating more meat.

ES: Do you foresee Latin America as a relevant market for Oroeco?

IM: Definitely. It’s just a matter of when we have the technical bandwidth to customize our apps for the Latin American market, as well as sorting out the logistics for connecting to local financial institutions. The biggest challenge is automatically linking to banks and credit cards in the region, which is how Oroeco tracks spending and investment, empowering us to calculate your social, environmental, and health impacts. We’re currently using a system that only works well in the U.S. and Canada, as well as some parts of Europe and Asia. Latin America still needs something like Mint.com that allows users to easily aggregate all of their financial information online. Once this kind of service takes off, and the spending and investment data becomes available, then Oroeco (and similar services) can add social, environmental and health impacts to start gamifying your everyday choices.

Currently, the Oroeco team is rolling out its product to its first group of approximately 200 beta testers, who it recruited through an Indiegogo campaign. The startup will likely be recruiting another round of beta testers soon. Those interested in giving it a try can join the Oroeco mailing list on www.oroeco.com or “like” the Oroeco Facebook page.

And to learn even more about Oroeco, see the video below: