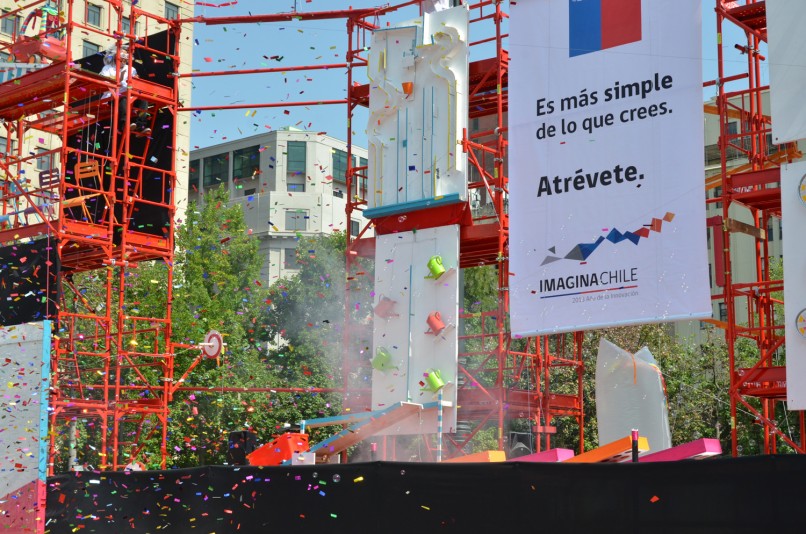 Nearly 300 people gathered in Santiago’s Plaza de la Constitución to celebrate the official launch of Chile’s Year of Innovation with ImaginaChile (Imagine Chile). For four days, the people of Santiago looked on in fascination at a curious structure: a Rube Goldberg machine. The purpose? To demonstrate to Chileans that innovation does not necessarily have to be complex.

Chilean President Sebastián Piñera discussed innovation and made reference to one of the major challenges he perceives in curbing the fear of taking a risk. He said, “We need the courage of those who dare to try new things.” Piñera also indicated that Chile is in the midst of a key dilemma faced by middle-income countries, at a turning point at which it must either achieve development or risk remaining stagnant.

For Piñera, higher levels of R&D are essential to advancement. Chile’s Minister of Economy, Pablo Longueira Montes, highlighted the importance of innovation, the weight of creativity and the need to add value to actions. He affirmed, “Declaring 2013 as the Year of Innovation is an invitation for Chileans to dare to imagine the future, marking an inflection point towards a society that rewards those who venture to look at the world in a different way, seek out solutions to problems and leave behind traditional models. We want everyone to imagine a different Chile and to feel that they will be the architects and builders of the future.” With an unprecedented budget of one billion dollars, Chileans await an intense agenda during the Year of Innovation. More than 100 activities have been planned to take place in both the public and private sectors.

These activities are organized around three central themes:

1. Science and Human Capital – Initiatives to support scientific research and generate specialized human capital. Numerous projects have been organized in this rubric, including a new building where the Chilean National Commission on Scientific Research and Technology (CONICYT) will be housed, the renovation of the Santiago Planetarium, Chile Va!, and the inauguration of the ALMA Observatory, among others.

2. Entrepreneurship and Competition – The projects in this area are aimed at promoting the creation of businesses, competition among SMEs, and innovation within the state. Legislative measures will be passed related to R&D, industrial property and starting a business. Endeavors in this sector also encompass programs to encourage competition, teach skills related to accounting and management, and promote public innovation.

3. Quality of Life – This category covers initiatives to improve quality of life in Chile. Related projects include a biennial design event in Santiago (la Bienial de Diseño de Santiago), the inauguration of the UC – Anacleto Angelini Innovation Center and of the 3M Innovation Center, and International Innovation Week.

The slogan pretty much sums it up: It’s easier than you think. Go for it. That’s the message Chile is sending with the Year of Innovation – the idea that anyone can innovate. Innovating means imagining a better Chile and undertaking projects that render it a better and more efficient place. Perhaps Hernán Cheyre, Executive Vice-President of Corfo, said it best, “Our goal is to bring about innovation. It is within this context that we invite all Chileans to envision the country they want to live in and build that place together.”

See below a video – in Spanish – featuring the stories of a few Chileans who have dared to innovate: