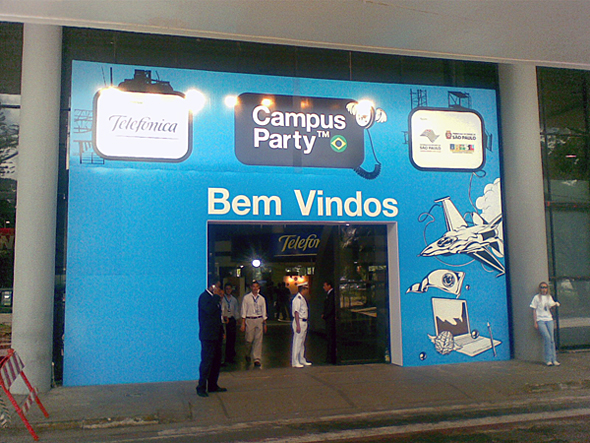 Campus Party Brazil is just under a few weeks away. From January 28th to February 3rd, the sixth Brazilian edition of the event will take place in the city of São Paulo in a new and improved edition that will feature over 500 hours of content and activities for attendees to enjoy.

This year, the various sectors of the conference will be named for great historical figures: Galileo, Michelangelo, Gutenberg, Pythagoras, Socrates, Archimedes and Hypatia. Each space will play host to activities following specific themes. For example, the Michelangelo stage will feature content on design, photography, music and video, the Gutenberg room the subjects of social media and blogging, and the Hypatia area will be the home of all things entrepreneurship.

Special activities will also take place in the context of Campus Party Brazil 2013, such as the Robot Olympics, the Business Marathon and Barcamp, the so-called “most democratic space” of the event where participants can share and debate concepts and ideas. Attendees won’t want to miss out on the expo space either, which will feature a section on digital inclusion as well as the Intel Extreme Masters area.

Of course, one of the main draws of Campus Party Brazil will be the list of thought leaders lined up to attend the event. American astronaut Buzz Aldrin is undoubtedly one of the most exciting figures confirmed to speak at Campus Party, alongside Atari founder Nolan Bushnell, business innovator and best-selling author Don Tapscott, the Electronic Frontier Foundation’s Rainey Reitman, Singularity University head Salim Ismael.

Sponsored by Telefonica ǀ Vivo along with numerous institutional and corporate partners, Campus Party Brazil is one of the country’s premier events for innovation, communication and thought. Want to take part and be a campuseiro? Hurry up. There are only 8,000 tickets available to attend, and to date, nearly 7500 have been sold. To find out more and reserve your space, visit http://www.campus-party.com.br.