The 2013 race is off for Rockstart Accelerator. The Amsterdam-based organization has opened inscriptions for its next batch of startups, those interested having until January 20th to apply.

Though it may not be headquartered in the most obvious locale, Rockstart represents a huge opportunity for Latin American startups. In fact, one of its greatest success stories to date, Postcron, hails from Argentina. 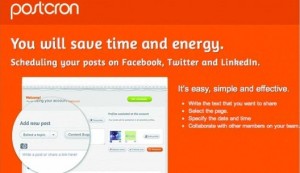 A scheduling tool for social media platforms such as Facebook and Twitter, Postcron formed part of Rockstart’s very first batch of startups and received a €100,000 investment from Vidoze.com just six weeks into the Rockstart program. Founded by Alejandro Rigatuso, it published more than 40 million posts within a year of its launch. When we were last in contact with Postcron in June of last year, Rigatuso revealed that the company already had over 60,000 registered users – a number that is surely much greater now.

Those hoping to follow in the footsteps of Postcron and become a Rockstart company have until Sunday, January 20th to apply. The program, which focuses on tune, practice and pitching, provides seed investment, workspace, mentoring, coaching and a one-month stint in Silicon Valley.

Think you’ve got what it takes? Find out more about Rockstart Accelerator and its application process here.