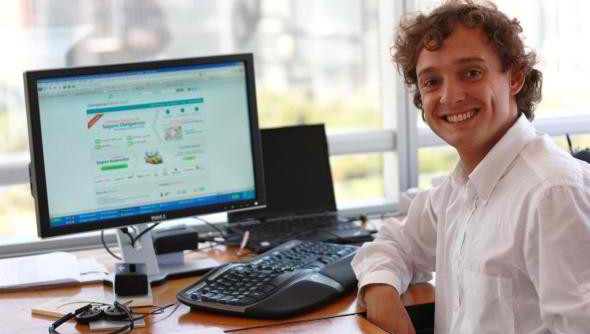 On his first day as an entrepreneur with what would eventually become ComparaOnline, Sebastián Valin found himself standing in an empty Santiago office with no colleagues, no infrastructure and, frankly, nothing to do. Given his situation, he decided to go for a walk to introduce himself to his neighbors. After knocking on a few doors, he came across the office of Endeavor Chile, and thus, his relationship with – and desire to be part of – the organization was born.

This week, Valin is participating in the 46th Endeavor International Selection Panel in Miami. I caught up with Valin to find out more about his perspective on the Endeavor process and to learn a bit about Chilean-born ComparaOnline.

Valin began working on the concept and business model for ComparaOnline in 2008. After arriving at the idea and discovering the various companies offering similar services in markets around the world, he got in contact with those companies abroad to see what he could learn. While some ignored his interest, others did not, and after communications by e-mail and phone calls, he traveled to Europe. He spent time at similar comparison-related enterprises in Madrid and London to get to know the industry and learn how things were done. Subsequently, he spent three months working out his business plan.

One of the most substantial elements that render Valin a stand-out entrepreneur is what happened next.

Without an official business or brand, Valin managed to raise a seed round of funding from the classic “three Fs” – family, friends and fools. Six individuals participated in financing the company, including a few angel investors he did not know. Essentially, he is living proof of a continued theme in the entrepreneurial world: It’s not about the idea, it’s about the person behind it.

Valin officially launched ComparaOnline in 2009 with the help of another seed round of funding. From then on, he set out to make the startup a leading online platform for customers to compare and purchase travel, insurance, communications and financial products and services in Latin America.

Today, ComparaOnline has operations in Chile, Colombia and Brazil and boasts over one million users. Moving forward, the company will roll out in other Latin American locales.

Endeavor a Personal and Professional Journey

For Valin, the path towards Endeavor is both personal and professional in nature, especially considering that he has had such close contact with the organization from the very start.

On a personal level, Valin explained, being chosen as an Endeavor entrepreneur would be an enormous accomplishment, as Endeavor is an entity he greatly admires. Moreover, he noted the personal value of its extensive network of entrepreneurs, many of whom are going through life experiences similar to his own.

Professionally, the Endeavor stamp of approval would mean a great amount of support for ComparaOnline. It would open the door for meetings and access to a worldwide network and grant the company the chance to utilize a wide range of professional tools.

Valin will represent one of just two Chilean companies being interviewed today at the 46th Endeavor ISP today in Miami.

Ebanx: A Revolutionary Brazilian Payment Platform on a Wild Ride
This Thursday: Geeks on Beer in Rio