HackDay was in full force this Sunday morning, with over 50 engineers still hard at work even after a full 24 hours of hacking.

The event began on Saturday, December 8th. But beforehand, applicants had to face a test. Damian Bellumio, COO at Senzari, Partner at Quotidian Ventures and organizer of HackDay, explained that the inclusion of an entry test has been an essential part of this new-and-improved third HackDay event. This time around, HackDay organizers wanted the competition to be 100% technological, open to the best of the best of engineers to create great, technologically-sound products. Bellumio said that they’d decided to focus more on tech-minded hackers and less on designers and other professionals who are often “too concerned with making something pretty.” 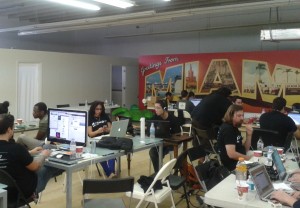 Bellumio also noted the youth of the participants in the competition. He highlighted a 17-year-old Brazilian hacker who not only scored highest on the contest entry test but who also was the only person to solve the Fibonacci problem given with it.

A total of 54 HackDay hopefuls passed the entry exam and formed teams to start work on their projects at noon on Saturday. They worked for the rest of the day, through the night and into the morning.

Projects in software and applications emerged from the event, for example, MedPoint. Jeremy Miranda, member of the MedPoint team, explained that the app has been created for medical appointments. Its stand-out feature is that it allows patients to check in to a virtual queue and alerts them when their turn is just about up. Thus, they can take advantage of the time normally spent in the waiting room running other errands nearby.

We also talked to Peter Martinez, who was working on a project called PriceMagic. It helps e-commerce stores to run campaigns on products based on certain criteria – top-performing products, underperforming items, categories, etc. Users then input information such as tolerance, price point and Google analytics and are provided information as to how to maximize their revenues.

Interestingly, items in the hardware realm – something about which Bellumio expressed excitement, especially given the technical focus of the competition.

We chatted with Richard Grundy, a HackDay participant, as he whittled away at figurines in a corner of the LAB Miami. Grundy explained that he was working on a project called NFC Games, through which NFC chips with identities and the ability to speak wirelessly are placed in small figurines. Mobile devices, such as tablets, uniquely identify each figure, which then serve to launch specific games in the device. What’s more, the chip places the character depicted by the figure directly into the game.

We also spoke with Edwin Hernandez, who was working on rendering a software solution similar to two hardware products – HulaDrive and HulaSync (out of a Startup Weekend event) – he’d already produced. At HackDay, he created an infrastructure-free cloud storage solution. He told us, “It uses services from everybody else’s cloud, mounting clouds from Amazon, Google, Dropbox, etc. In a smart way, files are partitioned so they’re best used.” The service, a sort of broker for cloud storage, will require clients to pay a low monthly rate and keep fees to a minimum thanks to operational costs that will be reduced by up to 90%.

HackDay took place at the LAB Miami. The five finalists chosen at the end of the day will present this Friday at the AVCC.