Buenos Aires is one of the most vibrant cities in Latin America and the world, giving New York a run for its money as a city that never sleeps. Each and every day, hundreds of activities go on throughout the city that are rich in culture, entertainment and fun. This in mind, Citibuddies, an online social platform to help people discover and explore their favorite cities, has chosen the Argentine capital as its launching point.

With the mantra Be a local everywhere, Citibuddies connects locals and visitors with events and activities that are likely to appeal to them most. It provides users with personalized recommendations based on their tastes and likes, allowing them to access subcultures and communities that they may otherwise never know exist. 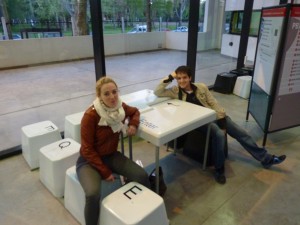 Based in the United States, Citibuddies was founded by Aidan Mehmed, a Bulgarian native, and Darja Gutnick, who is originally from Russia. I recently caught up with the two to learn a bit more about Citibuddies and the selection of Latin America as the place to launch.

Opening our conversation, Gutnick and Mehmed addressed one of the questions they’re most often asked: Why Buenos Aires? Given the current economic climate in the country and what seems to be an exodus of the city’s extensive expat community, why here? Why now?

To launch Citibuddies, the team knew that they needed to identify a locale with a strong market and solid resources. They identified the greatest potential for growth in Africa and South America, and after more analysis, settled on launching in a Spanish-speaking Latin American place.

It was Gutnick who really pushed for Buenos Aires as Citibuddies’ starting point. On previous visits to the city, Gutnick naturally connected with the its thriving entrepreneurial community and met several individuals – expats and Argentines  alike – with startups. Moreover, she was impressed by the city’s rich cultural offering and nightlife. She explained that she noted in Argentina many characteristics similar to her home country of Russia, namely, the importance of networking in a business’ success.

Mehmed and Gutnick also pointed out that Buenos Aires has a history of adapting technological products and trends quickly. They highlighted the case of CouchSurfing, which can attribute much of its early success to a fast take-off in Buenos Aires. The local community is innately curious, especially when it comes to meeting those from other cultures. Latin Americans, in Argentina and elsewhere, are very open with social media and, in that sense, early adapters of technology.

Once they’d established the why, Mehmed and Gutnick went on to discuss the what. Exactly what was Citibuddies setting out to do, and how were they going to do it?

Citibuddies’ goal is to provide users with a democratic and innovative way to share their experiences in and perspectives on the cities where they live or that they are visiting. It aims to create a strong, transparent and humanistic network of support. Mehmed explained that Citibuddies will prove especially beneficial for those visiting cities with which they are not all that familiar, citing his own experiences in traveling to new places without knowing anyone to spend time with or having anything to do.

That in mind, Citibuddies won’t just be aimed at expat communities and tourists – it has a lot to offer for locals as well. Gutnick explained that when talking to potential local users, the Citibuddies team discovered that about half of the individuals they interviewed complained about engaging in the same activities and going to the same places over and over again. While they were interested in doing more, they often didn’t know where to go or what to do. Moreover, and very relevant to Latin America, safety was often a concern. Citibuddies will build trust among out-of-towners and locals alike in finding safe and appropriate activities and events.

Citibuddies works by connecting with social media accounts and analyzing information to create interest profiles for each individual user. When logging in, users will find four to five recommended events on their landing pages that are directly tailored to their personalities and preferences.

In preparation for its Buenos Aires launch, Citibuddies has focused heavily on marketing and getting the word out. Mehmed explained that Citibuddies’ initial target will be individuals ages 18-35 with outgoing personalities and who are generally willing to try new things. They will implement a number of strategies to reach the critical mass necessary for success.

Citibuddies is working to develop partnerships with local organizations and programs geared towards students and visitors from abroad. It is currently working with Mente Argentina, for example, to co-organize activities in and around Buenos Aires. It has partnered with AISEC as well.

Local communities of students and designers will also be essential for Citibuddies’ ability to spread the word. About a month ago, it launched a campaign with fellow Buenos Aires startup t-Art encouraging users to submit designs for a limited edition t-shirt. And for students, Citibuddies has organized a “CEO for a Day” campaign inviting one lucky student to experience life as the head of a startup. Later down the line, Citibuddies will also target tourism students and get them involved in the platform.

Crowdfunding has played an important role in getting Citibuddies off the ground financially and, more importantly, in spreading the word. Mehmed explained that crowdfunding platforms have proven extremely helpful for the Citibuddies team in getting their idea straight to the people and seeing how potential users react.

Because Citibuddies is working with virtually no marketing budget, it has had to get creative with its efforts. However, its “crash course” in no-budget marketing has paid off so far – in two months and with no official product launched, it has already created quite a bit of internet buzz.

Moving forward, Mehmed and Gutnick acknowledged that they have a lot to pan out. One issue they’ll have to tackle is that of revenues. Eventually, Citibuddies will likely offer advertising space on its website as well as eventual mobile apps. It will also give event promoters and organizations the option to pay for sponsored events or set up branded events through a freemium scheme depending on the number of events or activities uploaded per month. Moreover, it will co-host activities and generate profits there. 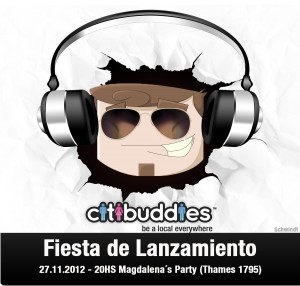 Citibuddies will officially launch its closed beta version in Buenos Aires on Tuesday, November 27th. It will tweak its system over the subsequent four weeks before opening to a wider audience. At the same time, part of the team will begin pre-launch efforts in Brazil – the company’s next target.

In conjunction with the official Buenos Aires launch and expansion efforts in Brazil, Mehmed and Gutnick said they plan to reach out to VCs, incubators, angels and accelerators in Brazil, Chile or the U.S. to further develop their product and plan. And, of course, they’ll continue to roll out the product city by city across Latin America and abroad.