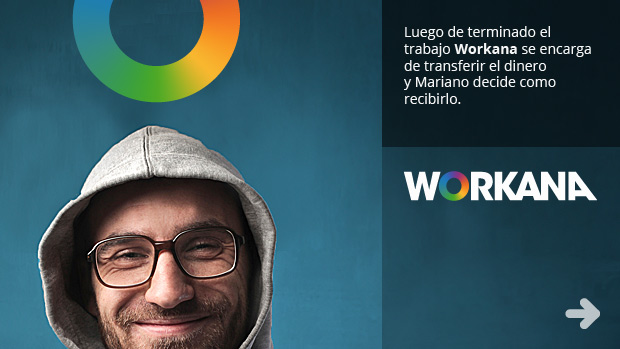 Following the footsteps of international business Odesk, Argentine startup Workana has joined in on a fast-growing phenomenon: the rise of telecommuting and remote work.

Similar to Nubelo.com and Freelancer.com, Workana connects freelance professionals with potential employers from virtually anywhere in the world. It forms part of a high-potential market in rubrics like design, content creation, translation and programming. Users are not charged for registering for the site or for applying for jobs – fee payment is only required once a project has been assigned and an agreement between both parties has been reached.

Tomás O´Farrell, one of the founders of Workana, boasts a long-standing entrepreneurial career, with enterprises such as Sonico and Fnbox.  He has now joined Guillermo Bracciaforte, Fernando Fornales and Mariano Iglesias to bring this, his latest project, to life.

Just five months after its launch, there are already 25,000 users registered on the Workana platform. The number of projects available is growing reach month, with more than 600 jobs being offered.

Workana was one of 16 companies seeking investment at the NXTP Labs Demo Day in June. And now, it looks like that mission has been accomplished. The startup has lined up an investment round worth US$500,000, led by U.K. corporation DMGT, owner of The Daily Mail. More than a third of that amount, US$200,000, has already been placed as an initial investment.

The group will take advantage of the deal to get its foot in the door in Latin America, the idea being to replicate the Workana model in other countries. Freelancer.com took similar measures just a few months ago.

O’Farrell spoke with PulsoSocial’s Clarisa Herrera about the deal.

Clarisa Herrera: What is behind DMGT’s decision to buy and develop employment portals in various parts of the world?

Tomás O´Farrell: One of DMGT’s companies, Evenbase, is one of the top five online recruitment platforms in the world. Its portfolio includes Broadbean, Jobsite.co.uk, Oilcareers and Jobrapido, rendering it one of the largest search engines in the employment sector today. Evenbase is looking to build a complete portfolio within its area, and in that sense, the Workana investment is a strategic move. Up to now, the company has had no division focused on temporary work, nor has it done much profound exploration of the Latin American market.

CH: What does the freelance market represent in terms of business?

TO: The freelance market, or that of temporary remote work, is taking off very, very quickly. Odesk and Elance grow by more than 50% annually, and in 2012, the sector is expected to pass the billion-dollar-mark in revenues. This is only a small fraction of the offline freelance market, which brings in an estimated US$473 billion internationally each year.

CH: Why do international funds take interest in the Latin American markets?

TO: This case involving DMGT is not exactly comparable to that of conventional fund. DMGT makes strategic investments in companies that fit into its current setup. It is on the lookout for opportunities from all around the world. That said, DMGT knows that Latin America is a great opportunity in terms of talent and regional potential.

CH: How does the Workana model differentiate from that of other freelance portals?

TO: There are no big functional differences. The main distinction is the capacity to execute the concept in the region and “tropicalize” the model. At Workana, we want to offer local advantages in each country in which we are active. We believe that there is a huge segment of Latin American clients interested in contracting Latin American professionals instead of outsourcing low-cost jobs to places like India.

CH: On a regional level, how will Workana and DMGT resolve the issue of payment keeping in mind the different currencies used in each country?

TO: This is one of the region’s biggest challenges, but it will be one of our greatest advantages should we find a solution. We are working with a multi-currency system and in talks with payment processors to develop a cash-in cash-out payment infrastructure that as simple as possible. For the moment, I can’t reveal anything beyond that.

CH: Could you tell us about the negotiation process involved in all of this? What requests were made? What demands?

TO: The fact that we had experience in investment deals was helpful as we have a decent idea of what to look for. What we’ve taken away most from this process is the fact that what’s most important in investment deals is a positive feeling between both parties. We were looking for a match in vision and product, a partner who was on board with the type of company we were creating. We are very happy to have found DMGT as we have similar viewpoints when it comes to the important questions. Moreover, we have good chemistry. When that happens, issues like valuations, clauses, etc. take care of themselves.