Day two of Red Innova New York kicked off this morning with a three-part opening session, during which attendees listened in on key discussions regarding emerging markets, the entrepreneurial lifestyle and challenge of competing with corporate giants.

From Latin America to Asia: the Story of OLX in Brazil and India

The OLX team made a second Red Innova New York appearance this morning when Alec Oxenford, OLX Co-Founder and Co-CEO, took the stage to tell the company’s story in two parallel emerging markets: Brazil and India. OLX, which hosts free user-generated classified ads, is used in over 96 countries and is available in 40 languages. It has proven especially successful in emerging markets.

Oxenford used the Red Innova stage to tell the story of OLX. The company was born in 2006 and attacked a global market from the start. Oxenford and fellow co-founder Fabrice Grinda recognized an opportunity in the classifieds market, which was in the process of transitioning into the online world. Moreover, the two knew that starting a tech business could be a relatively inexpensive process. 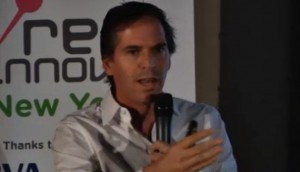 OLX implemented an exceptionally strong and studied SEO strategy to establish its position in various international markets. Little by little, the company grew, its leaders feeling confident that they were on the right track. However, when they witnessed a similar company take off explosively in a very short time, they realized that something had changed.

OLX discovered that the classifieds business heavily favors the number one market player. Moreover, the team recognized that becoming number one was not likely to happen solely based on SEO. Thus, the company followed competitors in launching television ads in a few strategic markets – primarily, Brazil and India – and improving their product overall. The result? OLX is the stand-out classifieds leader in various markets around the world.

Time vs. Impact in the Lives of Entrepreneurs

Martin Varsavsky, Founder and CEO of leading Wi-Fi network Fon, followed Oxenford and talked about his life as an entrepreneur. During his 20-minute presentation, Varsavsky focused on two main talking points.

First, he touched on the success of Fon itself and, more importantly, its near non-success. He explained that the biggest competitor for startups is indifference – the fact that while most consumers say that they are interested in innovation, they aren’t necessarily willing to do anything about it. Fon nearly went under until the decision was made to ask users to opt out of its service instead of opting in. Taking advantage of its B2B model and partnerships, with this shift, Fon took off.

Second, Varsavsky moved on to talk about the main theme of his chat: time vs. impact. In entrepreneurship, he said, there is no correlation between time and impact. With a single moment, one big epiphany, entrepreneurs make the greatest impact.

Varsavsky highlighted the value of time management in entrepreneurs’ lives and, more importantly, not wasting time. He followed up with a wide range of tips as to how to do so, ranging from avoiding talking on the phone and delegating tasks to cutting down grooming time and turning off the TV.

His conclusion? Creativity is not a function of time spent.

The session came to a close with a discussion panel on competing with corporate giants. Varsavsky stayed on stage to moderate the discussion in which Andrew McLaughlin of Betaworks and Jack Hidary of Samba Energy participated.

Starting out, the panel discussed one of the hottest topics in the U.S. right now: the elections. Both Hidary and McLaughlin expressed a great amount of optimism regarding Obama’s victory and its significance for entrepreneurship and startups. They discussed President Obama’s positions on immigration, education, health care, innovation and entrepreneurship as highly beneficial for the American startup ecosystem. Varsavsky did point out, however, that high taxes may prove problematic.

Moving forward, the group discussed patents, which are becoming an increasingly hot topic in the tech world. McLaughlin argued that patents have been a great cause of uncertainty in the ecosystem as of late as they are being used to crush competition instead of defend good ideas.

Hidary went on to discuss two types of entrepreneurs in the United States right now – those in the tech world that we often hear about and appeal to venture capital organizations, and those who have an idea, get loans and build a business on their own. The latter group often flies under the radar and goes largely unnoticed by the media and community as a whole, rendering the U.S. tech ecosystem quite fragmented.

Coming to a close, Varsavsky shifted the conversation to the little guy, the small enterprises popping up and looking to compete with major players (the main topic of the conversation). McLaughlin acknowledged the role of law in combatting competition-crushing corporations. However, in the case of the United States, he said that small players do well largely because of an American populist tradition that tends to view large companies unfavorably. Hidary talked about the interplay between platform startups and platform features as part of the formula as well.