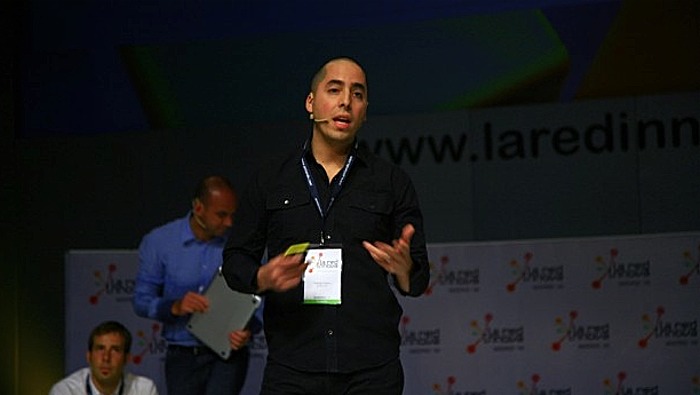 Red Innova New York is officially underway. Part of the organization’s global expansion strategy, the event has brought together over 250 innovators, entrepreneurs, developers and investors from Latin America and the United States.

Following the event kick-off this morning, Fnbox Founder and CEO Rodrigo Teijeiro took the stage to share his point-of-view. Teijeiro sought out to explain Latin America’s current status as one of the hottest regions in technology right now. Direct foreign investment in Latin America has increased, and the region’s political climate has become increasingly stable. Commodity prices have risen steadily, and unemployment rates have fallen. And in terms of GDP, Latin America is holding its own with a per capita GDP that is 2.5 times that of China.

Nevertheless, Teijeiro pointed to the notable obstacles that continue to keep the region from reaching its full potential. Transaction costs are high, and attacking the Latin American market means setting up a separate business in each country, rendering scalability a problem. He pointed to the comparison of Ebay and Mercado Libre, noting that the latter is 39 times less valuable than the former despite its strong regional hold.

Teijeiro took a specific look at Brazil, which has been pegged as the region’s technology leader. He touched on the country’s booming e-commerce marketing, pointing out that much of its success is due to the high number of Brazilians with access to credit cards. He also noted the prevalence of mobile phones not only in Brazil but in Latin America as a whole. He highlighted the country’s largest city, São Paulo, and its huge GDP (reaching that of five other countries combined).

At the core of Teijeiro’s presentation were a sense of reality-based optimism and a deep understanding of where Latin America is as well as where it needs to go. It can mirror the United States in many ways, thanks to cultural parallels, similar distribution channels and even well-aligned time zones. Transferring proven business models from the U.S. to Latin America and vice-versa, in turn, is not as difficult as it may seem.