This Friday, October 26th, the three-day event will kick off at Wayra Academy in Buenos Aires. Creative individuals will have the opportunity to pitch their ideas to participants, and after the best of the best are selected, teams will be formed to turn those ideas into reality. On Saturday, the teams will set out to formulate their MVPs and then start talking directly to their markets to evaluate and adapt their products. On Sunday afternoon, each project will present, and at the end of the day, the winners will be announced. 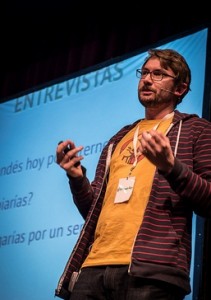 Ernesto Tagwerker, Founder and CEO of OmbuShop and leader within Buenos Aires’ Lean Startup community, will act as a mentor during the event. “I think LSM is a great workshop for anyone who has an idea for a startup and doesn’t know how to start,” he remarked with respect to his expectations for the weekend.

Tagwerker was especially enthusiastic about the prospect of helping teams to define their MVPs. He explained that many go into such events thinking that they need to produce highly-developed MVPS with various features. However, often times, an MVP means a survey or landing page, something to simply gauge whether an idea has the potential to generate traction. He also noted the importance of the “get out of the building” element of Lean Startup Machine, which forces teams to test the fundamental hypotheses behind their ideas.

There is nowhere in Buenos Aires where you can learn these concepts. At the Lean Startup Meetup, which I co-organize, we talk about Lean Startup and our experiences as entrepreneurs, but it’s not a workshop. Universities continue to teach and encourage business plans. Local contests tend to be business plan competitions. Those things encourage entrepreneurs to focus on something that really isn’t helpful for their business.

Jefrey Bulla, Workshop Coordinator at Lean Startup Machine, has led the way in organizing the event, as well as representatives from NXTP Labs, Wayra and Palermo Valley.

Those interested in participating should hurry up and register as there are just a few spots left. And for more information about the event in general, visit http://leanstartupmachine.com/events/buenosaires/.